What the Hell Happened to...Calbert Cheaney? 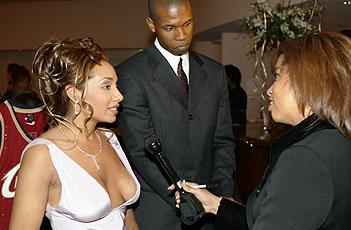 He was a 6'7 lefty shooting guard from Indiana University that never quite lived up to his high draft status.  You probably remember Calbert Cheaney.

Cheaney was drafted #6 overall in the 1993 draft by the Washington Bullets.  He'd play his first 6 seasons in the NBA with Washington starting the majority of games he played at the shooting guard.  His two best seasons were 1995 and 1996, when he averaged over 15 ppg.  After the lockout-shortened 1999 season, Cheaney would sign with the Celtics.

Of course the trusty Buffoon was looking forward to this:


Calbert is a player who brings veteran leadership and versatility to our club.  He can play either the off-guard or small forward position, and score at a consistent clip.  When we traded away Ron Mercer, we lost 16 points per game.  We feel Cheaney will be able to step in and help make up some of those points.  He can also drive the ball to the basket, and has the capability to be a very strong defender.  Both those things are essential to our system.


When the Celtics had signed Cheaney he had played in a total of 3 playoff games in his entire career.  That's after his first 6 years in the league.  Some veteran leadership, Buffoon.

He'd play in 67 games for the Celts that dismal 2000 season, averaging 4 points in 19 minutes a night.  He'd start 19 games.  After that season he'd be replaced by Bryant Stith, literally traded to Denver along with Robert Pack (who never technically played for the Celtics- but guys like him and Chris Mills, eventually may have to have WTHHTs written about them since I know everyone wants to know what they're up to!) for Stith and Chris Herren.  [Btw, Boston and Denver were like bffs when it came to trading guys.  Back in those days with the Evil Emperor and his trusty Buffoon, it seemed every season the Celtics would make deals with the Nuggets.  Off the top of my head there was this one, the Mercer for Fortson one, and the Shammond Williams for Mark Bryant & Mark Blount one.  There may have been others too.] 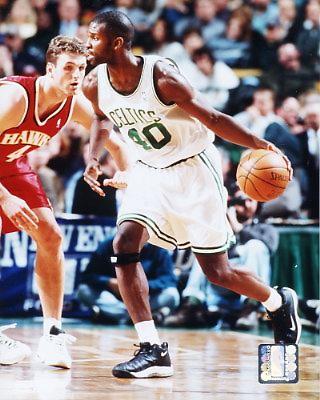 Cheaney would go on to play for the Nuggets, Jazz and Warriors until retiring after the 2006 season.

Looking back on his career, it's somewhat similar to my thoughts for Todd Day.  How come guys like Day and Cheaney didn't have a career comparable to Alan Houston?  Was it because the system they played in?  Were they just not as talented, or just didn't work as hard?  The stigma of players from Indiana and Duke not translating into great pros was exemplified by Cheaney and Alan Henderson [speaking of Henderson, I remember watching him as a freshman going against Michigan and their Fab 5 and him being the best player on the court that day.  I really thought he'd be a better pro than what he was.]  As a senior at Indiana Cheaney won all the major individual Player of the Year Awards.  It just didn't translate into a stellar NBA career.

Calbert was a real tweener.  Despite being an excellent mid-range shooter he was not a guard and not a true forward.  He didn't have the range or ballhandling skills to be a good NBA guard.  He was not a good dribbler at all, partly because the IU system was based on passing and moving away from the ball and very limited dribbling.  He was a great driver and shooter along the baseline, like a classic cornerman forward.

Calbert was also very nice, unselfish and not very assertive, he would get lost in the shuffle playing with selfish guys who weren't as talented as him.  He was a good leaper and deadly from 14-17 feet.  I remember him actually guarding Jordan quite well in MJ's later years when Cheaney was a Bullet, one year in the playoffs.

Back during July of 93 for Calbert's rookie year I was able to get his autograph during the summer at the Doral Arrowwood Hotel in Westchester, NY.  I was with my brother and when he came out, was going to a white van that I assume was bringing him to the court at the Westchester County Center where the games were played.  With his back to us I yelled out "Calbert" (and in doing so, stopped myself and realized what a weird name "Calbert" really is lol). He obliged and signed an autograph for me, making him the second WTHHT player to provide me an autograph after this guy (even though this guy gave my brother his sneaker from a game played in that very same Summer League).

One thing you may have forgotten about Calbert was that he was in this god-awful Crystal Waters video for "Say If You Feel Alright" (Ben Wallace is singing there too before he became an actual player; the other guy is the immortal Ashraf Amaya, thanks Eillio from the comments below for clarification!).  I had to share the video and make a gif of Calbert's part:

I mean really, could she get a worst cast of players at the time for that video?  Especially since it was before Ben Wallace became Ben Wallace?  I like how Juwan Howard had to get his own special time on screen.  That was around the time Miami tried offering him that enormous contract.  Now look at the corpse the Heat have on their hands on this year's roster lol.

As of 2011, Calbert was named Director of Basketball Operations at Indiana.  He lives with his wife Yvette, and their two children, Julian and Sydney.  Here's his introductory press conference:

Special shout-out to Cort Reynolds for filling in some valuable information on Calbert's career.  Definitely check out his epic book on the 87 Celtics, "The Greatest Team That Should Have Been" and the Larry Legend Nostalgia Basketball book, located halfway down the page .