What the Hell Happened to...Michael Smith? 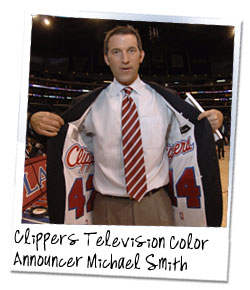 True story:  Michael Smith turned to Larry Bird on the team bus while out on a West Coast road trip in 1991, right around the trade deadline and said:

"I was talking to my agent and he heard a deal on his speaker phone.  Milwaukee sent Ricky Pierce to Seattle for Dale Ellis."

"I can't believe that," said Bird.

"No," said Bird.  "I can't believe your agent has a speaker phone."

This week in What the Hell Happened To, we remember Michael Smith, not to be confused with Michael The Animal Smith, who also played in the NBA.   Smith was drafted by the Celtics with the 13th pick overall in the 1989 draft out of BYU.  He was an older rookie, having served his Mormon Mission, and was 24 when he began his career.  At 6'10 he was supposed to be able to play either forward position and provide depth for Bird and McHale.

He wound up doing nothing of the sort.  He'd play 65 games for the C's his rookie year (starting 7).  While he had a few impressive performances (pretty sure he went for 20 points in a game or two) it was short-lived.  The only reason he probably was able to reach those numbers was because no one had an accurate scouting report on him at the time.  By the time the 1991 season rolled around, he was buried on the bench with the likes of Popson, Wynder, and Vrankovic.  He'd actually play in 47 games that season mainly because the Celtics blew out so many of their opponents. 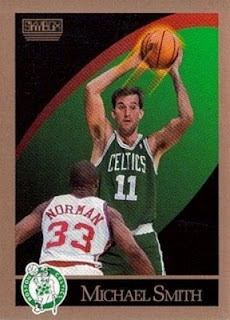 Of all the stiffs the Celtics had during that time period (Kite, Gilmore, Roberts, Acres, Kleine, Lohaus) I think Smith was the most disappointing.  Being selected ahead of Tim Hardaway and Shawn Kemp really hurts, especially because they were the exact type of players the Celtics could've used at that point.  Hardaway would've made Shaw completely expendable so the C's didn't have to deal with his bullshit contract in Italy.  And Kemp could've served the role Len Bias was supposed to.  Imagine that 1991 team with Kemp and McHale coming off the bench?

In fact, thinking back to the Bias draft, it is a legitimate argument of whether there was a worse draft pick made by the Celtics since.  You can argue Kedrick Brown but the Buffoon did draft Joe Johnson one spot ahead (of course he traded Johnson when Phoenix allegedly requested Brown).  You can argue Moiso who was a pretty high pick too, well because, the Buffoon is the Buffoon.  But Smith has to be in this discussion.

I'd have to say my favorite moment involving Michael Smith on the Celtics is when they acquired the tough-minded Derek Smith back in 1991.  This acquisition forced Smith to have an "M" added to the back of his jersey to accommodate "D. Smith" #43 (just like S. O'Neal and J. O'Neal should have this year and what R. Allen and T. Allen should've had when they played together the last 3 seasons.  Don't even get me started on this topic, as you know how much it frustrates me lol).

But I wasn't the only one hard on Smith.  As Jack McCallum eloquently states in his outstanding book Unfinished Business:


Smith traced his problems in Celtic Land to the summer before his rookie season.  He had gotten a message to report to camp at 237, because he needed to get stronger.  That was 15 pounds above his most comfortable playing weight.  He got injured almost immediately, with the extra weight being the primary cause.  While on the IR, he missed a bus to an exhibition game by one minute.  "They waited 22 minutes for Kleine and Pinckney !" said Smith.  That was classic Michael Smith- he remembered exactly how many minutes late Kleine and Pinckney had been.  He felt that his slow start had given him the tag of being both an undependable space cadet and a poorly conditioned player.


Smith's bigger problem, however, was that his type of athleticism was not the type of athleticism that succeeds in the NBA.  One day at Hellenic College (the Celtics' practice facility)  he stood at the free throw line with a football, and on his first attempt, tossed it into the basket at the other end; there just wasn't much of a call for that sort of thing during the game.  He lacked strength, and his arms were quite short for a man of his height, which limited his rebounding ability.  In addition the Celtics brass thought he was a selfish player, which didn't help his stock either.  One NBA scout watched a particularly cloddish Smith performance in one game and said "You know the Celtics probably wish this kid had to still go on his mission." 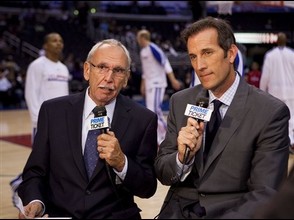 Today Smith seems like a total scumbag.  And this has nothing do with his and Ralph Lawler's comments (that got them suspended) regarding Grizzlies center Hamid Haddadi.  In January he pleaded not guilty to felony charges of grand theft in Orange County (Calif.) Superior Court in an alleged land development deal that went sour. (The hearing on the matter was scheduled for Feb. 5 but I'm having trouble seeing the outcome) The person filing the charges was a friend of Smith’s, a retired schoolteacher who suffers from an inoperable brain tumor.  Basically Smith’s friend put up his home--which he paid off--as collateral for a $735,000 loan for Smith and his business partner. When the deal went bad in the woeful housing market, Smith’s friend lost his home.

I've heard his broadcasts before- he's a piss-poor version of Ian Eagle and the awesome Jim Spanarkel.  Diane Pucin of the LA Times puts it well about Smith when she says:


(It) will be difficult to hear Smith making lighthearted fun of anything and not consider whether he is guilty of using his platform as a media figure and former pro athlete to raise funds for a real estate project and leaving others in financial peril.

Basically he's a dick.  He was a shitty player for the Celtics in his career.  The C's were at a point where a guy like Hardaway or Kemp could've made a big difference in extending the window of the Big 3.  Smith was useless on the basketball court.  And to boot, he seems like a jerk.

PS: I actually know for a fact I have some of my famous scrapbook photos of Smith from that 1991 season.  But I couldn't care less and rather not go through the trouble of taking them out.  In other words I put about the same amount of effort into this article as Smith did into his career with the Celtics.