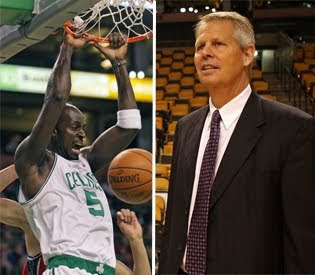 The Celtics head honcho was on WEEI yesterday and had the following to say on the KG/Villanueva drama:


"Well, there's one thing I know for sure, and that's KG would not offend cancer patients," said Ainge. "That makes no sense, and it makes no sense on a lot of fronts. Not only is he experiencing it in his own family, but that's not something -- in 30 years [in the NBA] -- I've ever heard someone say, in trash talking ... for a player to say to another player 'You have cancer' or 'You are cancer'? And the other point I'd like to make, before we move on to real basketball, is tweeting is not about an opportunity, tweeting is about self-promotion in most cases. He's [Villanueva] not trying to be a public servant by telling people about it, as a matter of fact he's the one who brings light to this attention, and if anyone is offended it's Charlie Villanueva who has brought that to attention, not KG. Second of all, Charlie would never tweet 'KG said to me I am a cancer' because that's embarrassing to Charlie. So he's tries to discredit KG and tries to bring sympathy to himself. There's self-promotion in tweeting -- all the time. You are talking about a guy who tweets in the middle of a game. Talk about self-promotion. I juts think this is just … we know who KG is. Talk about what you like or don't like about KG this is ludicrous."

Well KG did admit to using the term "cancer," but the rest of Ainge's sentiments make perfect sense. The more I've thought about this the more I think Villanueva was a chump for "self promoting" on twitter as Ainge calls it.