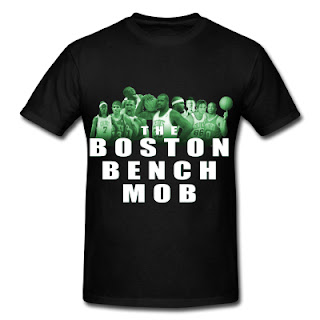 The Celtics strength going into the season was it's deep bench.  Something happened on the way to reality, because the bench, other than Big Baby hasn't been getting it done.  Injuries and Delonte's suspension have a lot to do with the problem.  Against the Bucks, a lineup of Erden, Baby, Daniels, Wafer and Nate came in with a 25-16 lead and very quickly turned that into just a one point lead at 32-31.  Because the bench just isn't getting it done, the starters are logging way too many minutes.  Rondo is averaging a league high 41.6 minutes per game.  No wonder the poor guy has sore feet.    In the Bucks game, Nate, Erden and Wafer got a combined 10 minutes playing time, while the trio of KG, Pierce and Ray logged 120 minutes in the second of back to back games.

When Shaq gets back (IF Shaq gets back) and Delonte comes back in 4 games, hopefully it gets a little better.  But we need more from Nate especially.  He has been in somewhat of a slump.  With Delonte out, Nate should be logging more minutes to back up both Rondo and Ray, but he is averaging just 13 minutes per game.  The reason could be because he is averaging just 19% from the field and 8% from beyond the arc.  That's downright brutal.  Marquis has been solid and has done some little things that don't always get mentioned.  Like, it was Quisy who tipped that pass on the Bucks last play to prevent a last second 3 pointer to tie the game again.    I can't wait for Delonte to be able to play.  I think he will do wonders for that bench.


I miss Perk.   Yes, we have JO and Shaq who are filling in on a rotating basis.  We haven't had both of them playing at the same time and that hurts.  Semih has a lot of potential and hasn't done too bad in the 2 games he has played.  Jermaine has been doing a good job of blocking shots. But none of them defends the paint like Perk does.   Big Baby has been doing great so far as the 6th man and he has been in there at the end of games as well.  KG is playing like the KG of 2008 so far.    But, I still miss Perk.  A lot.

Now, my take on the KG/Charlie V controversy.  First of all, trash talk happens all the time. Larry Bird was probably the king of trash talk and from what I've heard, he would stop at nothing to rattle a foe.  KG is the same way.  He's going to say some pretty rough stuff out there to get under guys' skins.  That's the psychological side of the game.   That's why it's called TRASH talk.  That being said, the fact that Doc backed up what KG said, I believe it.  Doc said he was yelling it right in front of him.  KG was yelling at Charlie that he was a cancer and that every team he plays on loses.  He's got a point there.  Doc wouldn't lie about hearing what KG said.  He would just stay out of it if KG was wrong and let him take his lumps.

With all that being said, it doesn't matter what KG said, Charlie is totally wrong for tweeting it and whining to the media and public like a little kid who was called a bad name.  If you remember, Charlie was the player who was tweeting at half time of a game they were losing when he should have been preparing for the second half.   If he was offended by what he thought KG said to him, he should have gone to him personally and cleared it up.  But to tweet it and make a big issue of it, especially when he didn't even get what KG said right, was very much out of line.  Of course he wouldn't say that KG called him a cancer.  That may be too close to being true.  But by saying that KG called him a cancer patient, he hoped to get some sympathy and make KG a villain.  Sorry, Charlie, it didn't work because others heard what he actually said.  It's Charlie who should apologize and not KG.

It is very ironic that the headline in the Chicago Tribune today was "Defensive Lapses Doom Bulls in 120-112 Setback."   Tom Thibodeau has been known throughout his coaching career as being a defensive specialist.  He is credited with building the Celtics defense that won the 2008 championship.   How ironic that his Bulls are losing because of defensive lapses.  That being said, I expect tonight's game to be a tough one for the Celtics because Thibs knows the Celtics rotations, plays and weaknesses.   I can see him devising plays just for the Celtics to exploit their weaknesses and devising his defensive sets to stop the plays he knows better than anyone.

I still say that red is just not Scal's color.  Those red Bulls jerseys just clash with his coloring.  He always gave me a nice festive Christmas feeling when I saw him in the green Celtics jerseys.  But tose red ones are just terrible.

The Celtics are starting a very rough stretch as after the game tonight vs Chicago, they go on the road to face some pretty tough competition.  They have a day off on Saturday and then had to Oklahoma City and face a young and athletic team with one of the best players in the league in Kevin Durant and a very good PG in Russell Westbrook.  The next night they play the Mavericks, who are always tough but will be tougher in the second of back to back games after having to travel over night as well.  They get 2 days off to regroup and then face the Heat, who haven't lost since the Celtics beat them on opening night and you know that they will be gunning for the Celtics to avenge that loss.  Finally, they head to Memphis and play the Grizzlies before heading back home for some rest before a Wednesday game vs the Wizards at the Garden.   Whew!  I'm getting tired just writing about it!   One thing I know for sure.  Doc HAS to use the bench more.  The starters can't play over 40 minutes and still have enough in the tank to win games at the end.  And, if the Celtics want to win any of those games, the bench has to step up.

The officiating is still driving me nuts.  They call one player for looking funny, or clapping his hands, or running away from the ref after a bad call.  Then they let others complain, make faces, jump up and down and whatever they feel like.  They call a double technical with even penalties for a play when KG swings an elbow but makes no contact but Bogut pushes KG intentionally twice after the play.  Seems to me as though equal penalties for those two actions wasn't exactly fair.  The two intentional shoves should have gotten more of a penalty.   Here's the clip.  What do you think?  Were both actions equal?