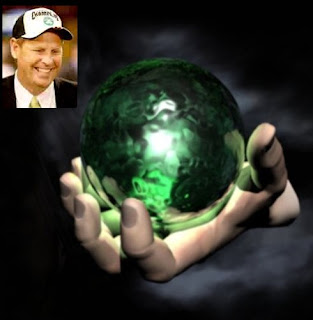 Are we seeing the future Celtics taking form? Much has been said about the plummet expected following the retirement of the Big Three. For the past three years we have seen the yearly influx of inherently limited pieces to complement the starting five. It was hard to imagine any of those additions growing into future starters. In most cases it was hard to imagine them even being meaningful role players on a team not led by a group of All-Stars. Indeed it looked like after the Big Three rode off into the sunset there was little chance that the fall from grace would be anything but hard and long.

The dreams for this season, and perhaps next, have been buoyed by the assembling of a second unit that seems likely to provide the kind of significant support that should extend the effective shelf life, and title hopes, of the aging All-Stars. By far the biggest splash has been the addition of yet more aging former All-Stars in the form of the O’Neal’s, Shaq and Jermaine. While they may be critical to the present, neither figures to be part of the post PGA era. Drawing far less fanfare, but much more likely to be around in three years, were the rest of the summer signings. For the first time in Ainge’s GM tenure the talent level of the backups is pushing starter quality. Remove the starting five and you still have an NBA squad. Perhaps not a playoff team but probably not the worst in the Association either.

For the first time since Garnett’s arrival, some would say since Danny took over, there are subs who may start in the future (you know, without the starter ahead of them suddenly going on the disabled list.) Some might step up to start as the aging stars recede into role players. Others will have actual trade value (beyond the proverbial expiring contract). Even the least among them appears to have the potential to become a significant backup, as opposed to just a stopgap until the starter gets his wind and can be rushed back into the fray.


One fly in the ointment is that all but Nate (2-years) and the rookies are on one-year contracts. However a curious thing has happened. Once the Siberian gulag of free-agent attractions, Boston has taken on a luster all its own. Nobody, or almost nobody, wants to go play for a bad team, and most observers felt the attractiveness quotient of the Celtics would go up if they were contenders. It also isn’t much of a stretch to figure that players would be drawn to a player’s coach, and Doc’s reputation is sky high. More surprising is the appeal of the “We are fam-i-ly” appeal of ubuntu which is really a throwback to the Celtics of old. Unselfish play is not the hallmark of the modern athlete but it has become a drawing card, perhaps in part for its contrast to the cold mercenary “I got mine” style that seems more the norm and has usually failed to produce favorable team results. It seems some new thoughts creep in after you’ve been “the man,” alienated your management and teammates by dictating that no one “disrespects” you, and then repeatedly gone home to watch the playoffs or finals.

Also Boston has become The Place to resurrect a career gone awry. It hasn’t always panned out, but it does seem to be a site for second chances. The recipe seems to be talent plus one or more burned bridges plus a large helping of humble pie and a new, although on a short leash, lease on life; mix well and mete out in measured doses. Finally there is the Celtics culture, another throwback idea that has found a rebirth in the crass cold modern athletic society. Family values are back and perhaps it is not so surprising that so many athletes who come from broken homes and see so many friends lost to the mean streets of the ghetto, are then quite responsive to being embraced by the warm acceptance of a franchise family. There are powerful influences held in the contrasting qualities of acceptance and accountability. They may be on one year contracts but perhaps not so eager to leave. The redemption, camaraderie, fit, and appreciation aspects all argue for the player/Celtics relationship to continue.

So who are these “keepers” that make the future seem a rosy green? My first candidate is one that has yet to make much of an impression since he has scarcely touched the floor. Avery Bradley will be a starter, maybe even a star. This year it may be in Maine but with the depth at guard the Celtics are in no need, or hurry, to rush him into battle. If he can play with Rondo, a lot of opponents may have to bring the ball up court with one of their front line. My next candidate is Semih Erden. Considering all the blog traffic calling for him to be cut, I suspect that there are a number of those reading that just spewed their beverage. I expected nothing considering the downright dismal reports coming over the pond the past two years. Summer league he looked mobile, willing, and mechanical—another tall stiff making a living off of his looks (I mean height). Flashes in the world games, hmmm, might be more there than I thought. Preseason games and he showed the aggression to go with his mobility—might have a defender once he knows enough to be in position and cut down those fouls. Left handed hook, right handed hook, good stuff if we can get it to him deep enough to stop that interminable backing down. Good, sometimes great, passes and a free throw jumper from the high post, this could develop into something good. If only we had a trio of All-Stars from whom he could learn and against whom he can test his mettle, oh wait . . . . Yeah I know, fans hope springs eternal for rookies, but it’s looking good so far.

Delonte, Nate, Marquis, and Davis (in Garnett’s absence) have all already been part time starters. All are limited, mostly by height, but all bring energy, points, and can score in a variety of ways. All are at least quality backups, now and in the future. All play defense, although in Nate’s case it comes somewhat belatedly, but it did come (and is why he is back). They make great backups but below average starters.

Von Wafer is a wild card. He has the tools to be a starting two guard, but . . . . Unfortunately it’s a pretty big BUT. So far we haven’t seen, nor does it appear to have been the case in the past, the basketball IQ or the attitude to do things the Celtic way. On this team that is a huge deal. With Delonte out for 10 games, Wafer is going to get his chance. He seemed grateful for the opportunity when signed. He seemed eager to do whatever they needed for him to do. It looked like the talent + bridges + humble pie recipe was in place, but as doc pointed out “Everybody says the right things during the summer.” The proof is in the pudding, however, and he lost his man on defense, didn’t box out (a point of emphasis in the everybody needs to rebound better), and his teammates rushed past him to help up a fallen player after a charge taken. More recently his “just playing is not enough” comments sounds like he’s still more interested in being “the man” than being a Celtic. If so I hope he shoots lights out and on Dec. 15th Danny pulls off something like Portland did with Jerryd Bayless for NO #1 protected through 8.

But that is exactly what this upgrade in the bottom half of the roster can offer. At least Ainge sits down at the table with some chips. He is no longer manning the phones trying to swap sow’s ears for silk purses. In a rather masochistic exercise before the finals last year I started to put together a depth chart for the post PGA Celtics. It looked something like this:

I went straight to the medicine cabinet. When I sobered up I tried to sugarcoat it by reconsidering Tony Allen, Marquis Daniels, and Nate Robinson. Nope, Tony I had been dismissing for years, Nate and Marquis were expiring and each had played himself right out of the rotation and into Doc’s dog house. It really was the Apocalypse!

Last night I called for a re-do and came up with this:

Now Pierce may still be around. Shoot, Ray and Kevin and Jermaine may still be around and all of them half-timers. But even if they are all out to pasture, Ainge is not starting over from the ground up. For the first time I can see a light at the end of the current carnival ride and am not thinking train wreck.