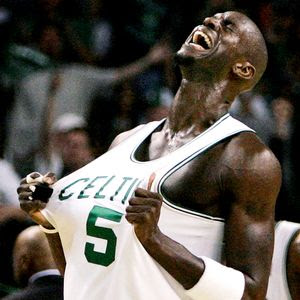 
‘It’s kind of crazy because that’s what people love to see. You watch the commercials and the NBA has dunking, [players making] faces and ‘Where Amazing Happens,” Odom said. ‘Now it’s like ‘Where Normal Happens.’ … There’s nothing amazing about not showing emotion.’”


He definitely has a good point there.   One of the Raptors fans made a comment about how KG without emotion is like Popeye without his spinach.   The more I think about it, the more sense it makes.   KG is a very emotional player.  He gets his edge from being the most intense player on the court.   When he has to rein in that emotion, it takes away from his game and from his focus.   Sources have said that Herr Stern is not going to budge on this ridiculous new rule.  If he doesn't, it's time for the owners and players to vote him out and get themselves another commissioner who isn't on a power trip that is going to ruin the game.

Jessica Camerato over on CSL has a good article about  Rondo's maturity and leadership this season.  This might just be the Celtics key to winning it all this season.  Rondo seems to have more confidence in his shot so far in the preseason.   He has been hitting his free throws and his jumpers as well.   We know that he can hit jumpers.  It was amazing to see him hit 3 pointer after 3 pointer in last season's HORSE contest.   In games though, his lack of confidence causes him to hesitate just for a second and that throws off his shot.  Let's hope that the confidence he has shown in his jumper and free throws in the preseason will continue into the regular season.   Also,  it is always amazing to see Rondo come away with the rebound when there are 3 or 4 other players much bigger than him vying for it.   Rondo's confidence and leadership are going to be key for this team if they are going to win it all.

It may just be me, but everything about Luke Harangody screams old school.  When I see him on the court I flash back to a young Tommy Heinsohn's playing days.   If he was shooting hook shots instead of shot puts, I'd swear he was Tommy reincarnated somehow.   He may be undersized for a power forward, but he has a knack for getting the ball.  He is a tough player and I think he has a future with the team.   This season he may have a bit of trouble cracking the rotation unless there are injuries, but I can see him as a building block for the future.

We are coming down to the final game of the preseason and there is still a battle going on between Von Wafer and Stephane Lasme for that 15th spot.  Both bring skills to the table.  Wafer brings outside shooting but he isn't a particularly good defender.   Lasme brings athleticism along with very good defense and the ability to get to the hoop for both scoring and rebounds.   Sean Grande and Celtics Hub both have expressed their belief that because of Avery Bradley's injury and Delonte's injury and suspension, Wafer may win the spot by default.  Lasme brings size and can play the 3 and 4 spots.  Wafer brings shooting and plays the 2 and 3.   With both Bradley and West expected to miss time in the beginning of the season, they make the argument that the Celtics will need a player to back up the 2/3 rather than the 3/4.  But Lasme provides a long athletic defender at the 3 that this team very much needs with Marquis Daniels' injury history.    With just one more game left, it won't be long until we find out who's in and who's out.

Two years ago, the Celtics had a chip on their shoulders.  There were 3 stars who came together to win their first rings.    They weren't the favorites that season but they were motivated and never lost that focus.    Over the past two seasons,  we didn't see that focus or that motivation due to injuries and possibly complacency.   This season that chip is back along with the focus and intensity.  The Celtics returning from last year's squad have the way they lost game 7 as motivation.  They know that they were so close and they were robbed.  That would motivate anyone.  Add to that there is Shaq with his own personal motivation to keep up with the Kobe's and JO who wants his first ring.   This team is focused and motivated.  Now all they need is to stay healthy.

I have watched the video of Rondo's pass to Semih in the last game and it totally amazes me.  It was the assist of the night on NBA.com as well it should have been.  Semih posted it on his facebook page.  If he sticks with Rondo, there are sure to be many more of these moments in his future.   I have to hand it to Semih for being ready to catch a pass from a PG facing in the opposite direction that seemed to come from his ear.   I know you've probably seen it before but I just can't resist posting it again.  It is a thing of pure beauty.