Stern to blame for absence of Rondo's headband 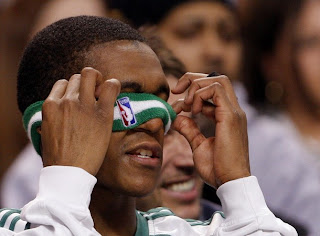 One would think David Stern would be busy trying to avoid a lockout or finding ways to make fans more trustworthy of NBA refs and their star treatment right? But no, first he went after Stan Van Gundy's mock turtle neck (Anyone ever stop to think that maybe because he's obese a button up shirt with a tie and his hyperventilating on the sidelines might cause a stroke?) and now Rajon Rondo's headband. In an interview with WEEI Celtics owner Wyc Grousbeck had the following to say:

“He’s not going to have it on. He used to wear it upside-down, as a real connoisseur would know and I’m sure you noticed, he had an upside-down logo, turning the NBA upside-down. And they won’t let him do it anymore. They said they were going to fine him for that. So he said, ‘To heck with you, I’m not going to fine it at all.’ That’s the Rondo headband situation for you connoisseurs of men’s accessories.”

Why do you even care about these things Stern? I expect his future bannings to include chalk throwing before games, KG's assault on backboard stations, headphones being worn when entering arenas, chin-ups on the rim, high fives, bubble gum chewing, and Tommy Heinsohn.