What the Hell Happened to...Larry Robinson? 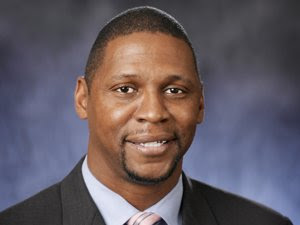 Today we remember someone who I'm fairly certain no one will remember.  It's the reason the What the Hell Happened To segment is in place.  This guy puts Reggie Hanson to shame in regards to number of career games played for the Celtics.  He popped in my head recently and I needed to research him.  His name is Larry Robinson.

Larry attended Eastern Oklahoma St for 2 years before transferring to Centenary, the same college as his cousin, Robert Parish.  Yes he is related to The Chief, which is a particular reason I remembered him.


Instead of going through his basketball odyssey, I figured it may be easier to show it: 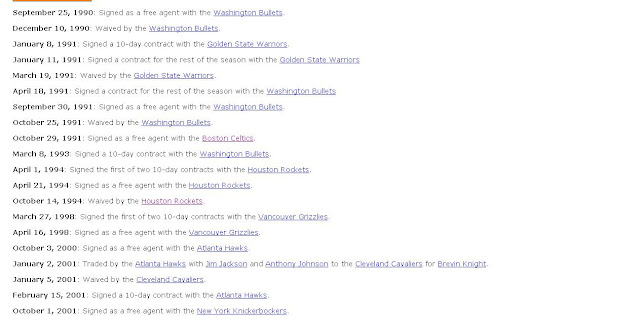 There's no way he couldn't be involved in a deal with the always-moving Jim Jackson. [Which by the way, it's amazing JJ never played for the Celtics.  Look at all the teams he played for!  Startling for a guy who was the number 4 pick and a pretty solid player].  For his career Larry played in 89 total games with 11 starts (including one for the 2001 Hawks at which he was 33 years old).  He scored 400 total points which comes out to a respectable average of 4.5 per game in 13.5 minutes (better than Jarred Jeffries at least). 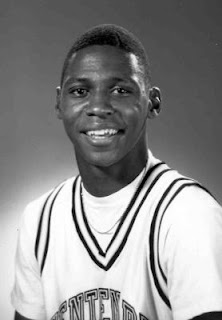 So Nate Robinson wasn't the first "Robinson" to wear #4 for the Celtics.  It was Larry who did, for one game back in the 1991-92 season.  The one game was November 1, 1991 against the Hornets.  Larry got 5 shots up in 6 minutes and made 1.  He also got 2 offensive rebounds and 3 fouls.  His Celtic career was over.  It wasn't a blowout game either- you'll see the Celtics won only by 3 and Larry Bird played 39 minutes.  It was the beginning of the season and maybe he really wanted to show he belonged.

I can't lie: I don't remember anything about him other than that for my Strat-O-Matic board game I took him from the Bullets and placed him on the Celtics.  And the fact he was related to Parish seems to me to have been lost through the years, so I thought it was important to remind everyone of that.

If Oliver Lafayette's career with the Celtics is over, he will have played 16 more minutes than Robinson.  That is simply incredible.

Today, Larry is a host at Horseshoe Bossier City which consists of a chain of casinos in Texas and Louisiana.  I' m sure if Larry sees that someone recently wrote an article on him, he'll be ultra-impressed.