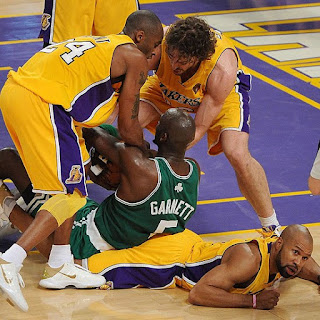 The name Nemesis is related to the Greek word νέμειν [némein], meaning "to give what is due". The words retribution, justice, vengeance and punishment may also come handy to describe what next season is going to be about. No need to relate to the events that gave an end to the 09/10 season, the effects of it would have been even more dramatic had it not been for the magic hand of the architect of this team, Mr Danny Ainge. We came up short because someone made it tougher for us. Some argue that it was just a matter of depth and that the team from Hollywood was simply stronger on the glass. For many others -including myself- other actors played an unexpected role in this drama: where rules and witnesses of the games take the side of one of the teams, the flashy one, the media one. Somehow the rules of the games were not equal for both teams, and therefore our team had to stretch to their limits in the search of glory. Gasol was given the Inquisitional Rack on which the Celtics hopes were dislocated and finally separated. The aftermath left a logical gruesome pain and a fear of death for the team that played the toughest during the last playoffs. 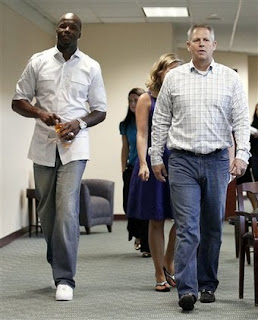 In a silent chamber, within the deep silence created for a team left for dead, Danny Ainge has been working on his formula for a new contending squad. With a little window left open, he has let in some new breath to instill hope for this new season. He first took care of the wounded parts of his previous project, starting with his inspirational guide -Rivers- and recovering some of his aging leaders -Pierce and Allen-. After that the steps to follow have been carefully chosen. He had to determine the nature and the spirit of the new team, the alchemy should be a result of the spirit of vindication and therefore he decided to shape the franchise with players who had to play for their personal nemesis in the quest for collective glory. Ainge had to find wounded egos, players grounded by time or personal struggles. With the help of the healing paternal figure of Doc Rivers, he has convinced a series of individuals to fight for the common goal in order to restore their personal glories. All the players signed for the Celtics join the core of the team in order to fight for what was taken away from them.


The first signing in early July was Jermaine O'Neal. Nicknamed "The Other" on this side of the Atlantic Ocean, O'Neal simply didn't have the chance Ray, KG and Paul had in 2007. When JO left the Pacers he didn't join any winning team, no ubuntu was sung in the lands of Ontario or Florida. His body aged fast in Miami after his role in Toronto was simply the same as the star of the team. Confusion, injuries, bad contract...Jermaine's career was on the edge of the proverbial fall when Danny Ainge offered him the full MLE. We are talking about a six time allstar with a successful career in Indiana but who has failed to reach the glory of a ring. He has a lot to prove this season, to show that all the work and recognition he got during most of his career have a meaning at the end of his days in the league. He is fighting for his name, for his career, for his legacy. 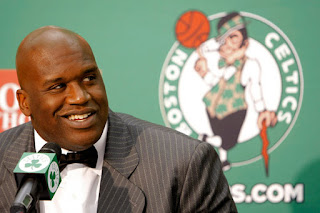 It was precisely legacy what brought the first and main O'Neal to Beantown. He first visited the ego doctor in Florida. In order to fight and beat the pride of your own ego you need to see the truth. Rivers showed him his own reflection in the mirror of time. He showed Shaq that he was no longer the best center in the league and that he could not get 30 minutes per game any longer. But he also presented him the unique chance to finish his career with another ring among players who had sacrified their roles -as Shaq will have to do- in order to get a another trophy. Shaquille O'Neal has been the most dominant player in the league since Michael Jordan and he will have a chance to end his career in the best manner possible: with a win at the end, the champaigne and the smiles. And more importantly Shaq is on a one on one fight against Kobe Bryant. As Bill Simmons pointed out recently, the first thing Kobe said at the end of Game 7 was "I got one more than Shaq". O'Neal is surely playing for the possibility of getting even with Kobe in their own house, there were he achieved his status of Hall of Famer, in the Staples. Shaq will fight all season for the ultimate glory at the expense of his biggest enemy, witnessed by the all the Hollywood stars that once supported him. He wants everyone to see him win, wearing the most historic and winning jersey of the league: the Celtic green. And Danny Ainge convinced him to sign for the minimum, for the glory and expectations are the maximum possible for a player who is already 38 and that contemplated playing in Europe this year.

Ainge also signed free agents Von Wafer and Delonte West to help Pierce and Allen on the wings. Wafer had a brilliant 08/09 season with the Rockets after which he decided to earn a big paycheck in the rich Greek league. Things didn't work the way they should have and he decided to try again in the NBA, but he failed some physical tests with Houston. Wafer is an athletic young player with a career to build in the league, with a reputation to wash after his exit of the league and his problems with Adelman in Houston. He will try to show that he belongs to this league, another hungry player recruited by Danny. 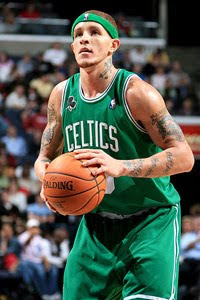 Last week, Delonte West was given a chance to make the team where he made a name in the league. After being traded to the Sonics in 2007 he was then traded to the Cavaliers where he teamed with Lebron James. On the court West has become a reliable shooter and athletic guard that can play tough D and be an efective rotation player in any team. Nevertheless, his off court curriculum has fattened in the recent seasons. Traded by the Cavs after the departure of James to Miami -some say motivated by a supposed affair between West and Lebron's mother- and later waived by the Wolves -a young team that could have used West's abilities- Delonte was almost out of the league when Ainge called him. Let's face it: not even one of the worst teams of the league wanted to give West a chance due to his bipolar disorder, legal troubles and off court dramas. Delonte will play to finally erase the boundaries of his two-faced life by trying to bury the dangers and effects of his personal life and to impulse and show the talents of his athlete career. He will fight to show he is a player, to show he should have stayed in Boston after the summer of 2007. He will want the ring he could not be part of that year. 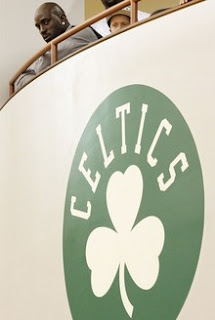 But it doesn't matter how hungry for revenge these new added players are in comparison with the thirst of retribution of the players that were here last year. Ray Allen broke a record of three pointers made in a game of the Finals to then struggle in the next battles. Kevin Garnett seemed older than ever against Pau Gasol in the first games and couldn't be a rebounding asset for us in June, Paul Pierce didn't have the same punch and effective game as he had in the 2008 Finals...and then Rajon Rondo who had been the best Celtic all season didn't have his best series against the Lakers. They are hungry, they gave it all to win and almost had it. They tasted the win and then someone took it from them. They must have been all summer thinking of it, dreaming of it, fixed and obsessed with finally getting it.

The 2010/11 is a team obsessed with victory and revenge. They want it all, and they will get it. Let's get ready for the glory of banner #18 for it is on its way this year. Arriving to your nearest theater, June 2011:  Nemesis day, live from the Staples Center, the Celtics will win the game they weren't allowed to last season.