Reality Check to all the Heat bandwagon fans 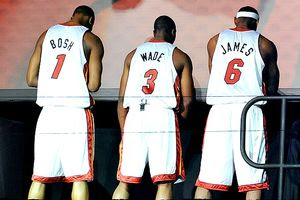 "The Heat will break the single-season win record [of 72]," Jeff Van Gundy said. "And I think they have a legit shot at the Lakers' 33-game [winning] streak [in 1971-72], as well. And only the Lakers have even a remote shot at beating them in a playoff series. They will never lose two games in a row this year."

I used to like Jeff Van Gundy. I liked how he made statements and was impressed with his overall knowledge of the game. However, over the years he has just started to annoy me and not just because his voice is almost as whiny as Fran Drescher. After the ridiculous statement above he has lost all credibility in my book. Sure, on paper Lebron, Wade, Bosh and their minions look to be world beaters.  But when you stop to think of the reality of the situation the picture changes.

Look, obviously I'm biased as are most of the readers on this site. We love the Celtics and are hoping the Heat  self combust.  However, I think in all honesty there is a good chance this whole experiment won't work out exactly according to plan.  First off, the chances of all 3 of these guys staying healthy all season is a reach at best.  Lebron is some kind of freak from another planet and probably on some steroid no one knows about, but Wade and Bosh have a history of injury problems. You take one of those guys out of the mix and it becomes a much easier team to guard.

Speaking of Bosh, when did he suddenly become this superstar? He put up great numbers in Toronto, but he was their only option. Has he played in a meaningful game aside from the Olympics? When has he ever played in anything close to the spotlight he'll find himself next season? The guy can ball, no dobut about it.  But he seems to be more concerned with his Twitter status than anything else.

Also, do people really expect the Heat to gel right away? All are used to being "the guy". Not to mention Wade and Lebron are both the same type of player and their egos(especially Lebron) are through roof.  Who gets the last shot? You really think their 35 year old coach will be able to handle that decision? It's easy to say all the right things in the offseason, but totally different when play actually beings.

So now you might be thinking, " well the 2008 Celtics did it the first year." That comparison is always laughable to me.  The fact that so called "experts" can make that claim is amazing to me.  First off the Celtics Big 3 were if not even close to the prime of their careers.  Sure, they all were "the man" on their respective teams but not really by choice.  You think Ray and Garnett asked for the supporting cast they had? You think Paul Pierce relished the fact that the best player he ever played with was the now bankrupt Antoine Walker?

Second, they are all different players that bring different skill sets to the table.  Remember, basketball isn't about having the best players, it's about having the best MIX of players.  That's what made the Bulls of the 90's so great. Everyone fit their role.  Garnett's a defenseive anchor and interior player(though lately he has become a jump shooter.) Ray is a three point shooter that likes to do most of his work without the ball. Lastly, the Captain is a slasher that likes to iso and either take the ball to the rack or pull up with his patented step back jumper.  They all brought something different to the table and developed great chemistry from the start.

Next is the supporting cast. Now, it's true that Rondo and Perkins were considered the weak links on the Celtics in 08, but I still think they were further along than Mario Chalmers and whoever they throw out their at center. Sorry, Joel Anthony and the corpse of Jamaal Magloire don't keep me up at night. Mike Miller was a good signing and I like Eddie House coming off the bench. Who do they have beside that? Big Z and Juwan Howard? Please. I've always liked Haslem's game, but he isn't getting any younger. Wade, Lebron, and Bosh are going to have to play big minutes for them to win.  Also, for those that think they don't need a point guard and center to win think again. I don't care who your wing men are you need to have dependable players and depth at both of those positions to win. Can Chalmers do it? Maybe. But I wouldn't put my money on it.

Next is coaching. Erik Spoelstra is not a bad coach by any means, but he's young and is going to have Riley breathing down his neck. Can he handle the pressure? Can he handle the egos on this team? I'm not convinced. Doc was the perfect fit for the Big 3 of the Celtics because he knew when to get on them and when to let them work things out themselves. I'm not sure if Spoelstra has the experience to do that yet.

Most importantly are expectations. It's win it all or failure for the Heat. They are like the Yankees now. Everyone will be gunning for them. Road crowds will heckle them and especially Lebron like crazy. Speaking of Lebron, it should be interesting to see how he adjusts to being the most hated man this side of Kobe(maybe even more). The guy has been on top of the world probably his whole life. Will he wilt under the weight of expectations. Or will having the pressure of carrying a franchise lifted off his shoulders cause him to excel. Let's hope for the former.

At any rate it should be quite an interesting season. Look, I'm not going to lie and say I'm not afraid of what this Heat team could be capable of. If all goes perfect they probably will win the title. By the way, for anyone who doesn't know who they'd root for in a Heat-Lakers final please allow me to make a choice for you. A Celtic fan never under any circumstance roots for the Lakers.  Anyway, the season can't start soon enough. I think the Celtics can still win it all depending on their health and am as excited about this upcoming season as any in recent memory. 50 more days!