Delonte's Looking for Love on Match.com 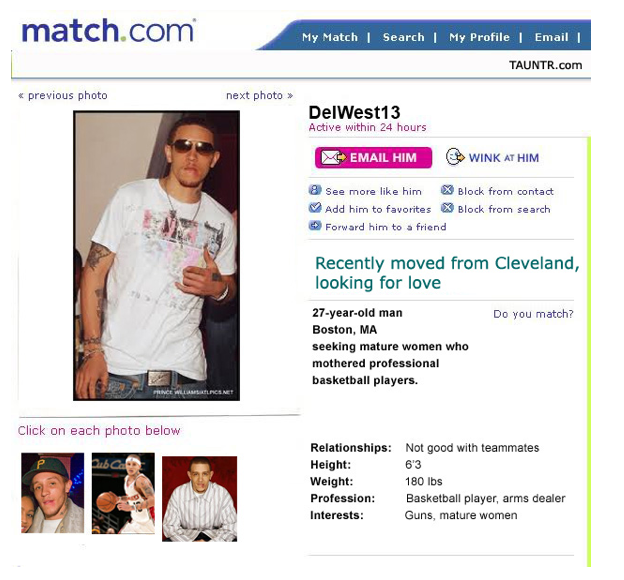 Tauntr.com has this awesome spoof on their site. Very disappointed in myself that I didn't come up with it first. I'm seriously slipping. It's kind of funny how so many people are scared to talk about the alleged Delonte West/Gloria James affair. When Calvin Murphy claimed it was true and that Mama James actually slept with more than just Delonte that opened some eyes. Then Michael Beasley's dad tweeted that Lebron wanted his son out of Miami because he resembled Delonte too much. Finally Marc Spears on twitter when asked after Delonte's trade to Minnesota if Miami would be a natural fit responded that's the last place he expects Delonte to end up for obvious reasons. Such a crazy story.

One person I think getting off way too easy is Lebron's mom. What type of person sleeps with her son's teammate and close friend? With a parent like that no wonder Lebron is such a dick. Anyway, the above profile is pretty funny and his matches are even more humorous. Everyone thinks Delonte would go for Ray's mom, but judging by his previous taste in cougars, I don't think Delonte has the best eye for the ladies. Also, my guess is that Flo Allen is out of his league.