What the Hell Happened to...Milt Palacio? 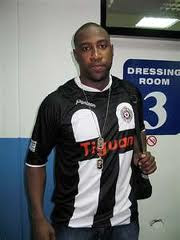 He was a 6'3 point  guard from Colorado St that went undrafted.  He was the only player of Belizean descent to play in the NBA (I'm not sure about that, but it sounds good and I'm going with it).  You may remember Milt Palacio.

Milt actually started college at Midland Community College at barely 17 years old (he seemed to have started a year young).  After 1 season there he transferred to CSU where he graduated in 1999.  Despite not being selected he latched on with the Grizzlies for the 1999-2000 season.

After 1 year with the Grizzlies he signed with the Celtics for the 2000-2001 season, under the Evil Emperor.  He'd play 58 games that season for Boston, starting 9.

While playing with the Celtics that season he gained the name "Miracle Milt" for this ridiculous shot at the buzzer to beat the Nets.  In case you somehow aren't familiar with it, enjoy:

Funny seeing Paul and Stephon in that clip.  It's ridiculous hitting a long distance shot to win a game, and it's even more ridiculous on a steal like that.  In fact one of the only ones in recent years that was arguably as good was Sheed in this one:

Rasheed's sent the game into overtime in which the Pistons won whereas Milt's actually won it.  That was also Milt's first shot of the night and first 3 pointer of his career.  It still haunts the Nets organization, even today.

That was without question Milt's highlight of his NBA career.  He was actually back on the Celtics roster the next season (which I have to be honest, totally don't remember) but was included in the awesome trade from the Buffoon along with Joe Johnson for Rodney Rogers and Tony Delk.  He'd go on to play for the Suns, Jazz, Raptors, and Cavs until the end of the 2006 season.  After that, he'd embark on a European adventure where he'd play professionally in Serbia, Russia, Greece and Spain.

Today Milt is still playing for a professional team in Spain, known as Saski Baskonia. If you'd like to reach out to him on facebook, you can here.

It's incredible to think he's only 32 since that shot was 10 seasons ago.  I wonder if he's still known as Miracle Milt in Spain.  I was never a huge fan of his (as I wasn't of many players who played under the regime of the Evil Emperor) but that shot was really memorable.  Most diehard Celtics fans won't forget him for that.