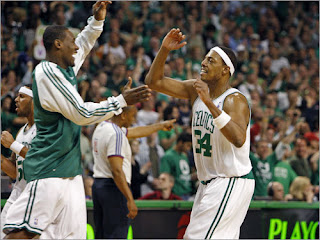 It's been more than two weeks since TA decided to take his game to Memphis. Danny Ainge went on to claim that Tony wasn't leaving for the money and that one would have to ask him his reasoning. TA finally spoke yesterday and had the following to say via the Associated Press:


"Being in Boston I was kind of overshadowed by those guys, Paul Pierce and Ray Allen," Allen said. "Here's a ballclub who's on the rise and a lot of guys can make names for themselves. It's a coming out party for a lot of guys on this team."

So maybe Tony wanted a shot at a bigger role. One can't necessarily fault him for having that ambition. I would have loved for him to have returned to the Celtics, but that's how these things go sometimes. Hopefully Danny can compliment the Marquis signing with another solid wing and best of luck to you Tony Allen. Thanks for your heart, effort, and performance in Boston these past several years.