The Final Guardian of the Window: Shaquille O'Neal? 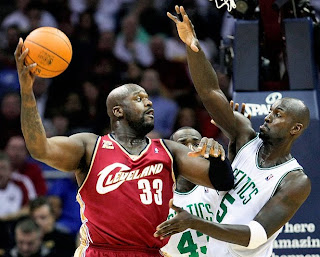 The famous window of chances for your Boston Celtics has been opened and closed repeatedly ever since it was generated in 2007. The injury of Kevin Garnett last year and the capricious laws of physics of the purple and gold tainted league have tried to shut it with the pestilent breath of Joe Crawford and the machiavellian designs of Mr David Stern. The winds of Father Time are approaching too and this apocalyptic scenario may need all the help necessary to keep all the windows and doors of chances open.

In times likes these, we may need to recur to the brutal laws of strength, height and history to block these currents from Sports Hell and send them back to where they come from. We may need the best center this league has had since Olajuwon left the Houston Rockets. This team may need a veteran huge presence in the middle when times get rough.

Shaquille O'Neal always was the modern version of the hammering play of Wilt Chamberlain, a huge display of strength only tamed by his free throw blasphemous skill and the erosion of time in his joints. Shaq has never been about finesse, about hard work on D nor he has ever taught clinics about how to translate your IQ for basketball on the court. He had his one and only law: Showing night after night that he was simply the strongest and most powerful center since the 60's. This Nietzschean Icon, this Super-Man was for more than a decade the ruler of the paint, his ego growing at the same rhythm as his Hall of Fame resume. Now, at the twilight of his career he wants a final chance to win it all. He wants a last glory before leaving for good. 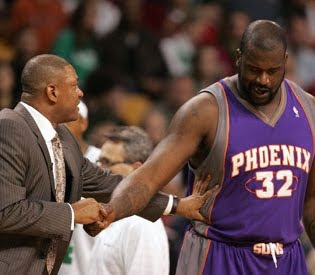 The Celtics are facing difficult times, gathering themselves for a final time (particularly if a lockout will considerably shrink the 2011-12 season, expiry date of KG's contract). Their coach will almost certainly leave before then and many things will change soon. Time is running out, just as the chances for Shaq to get a contract this season. The Green should gather all weapons possible to be best equipped for a final fight. In other words, we should get Shaq.

Getting Shaq would also grant some curious situations:

1. One of the best Lakers (ugh!) players would wear green. It's a first step into indicting revenge and defeat to the Hollywood floppers. Getting into the finals and beating Kobe with Shaq wearing Celtic gear would heal all our wounds from last June. Can you imagine?

2. Shaq intimidates and controls one of the other big names and big threats for #18: Dwight Howard. Motivated by the lack of respect shown by Howard after stealing his nickname, he has ever since played very well against the Elbow Machine. He may be useful in the playoffs against D-Elbow

3. He has played with Lebron. He may know some things about the hyped and pseudo king. Things didn't work out for this couple and Lebron left his teammates (Shaq included), quitting and showing a well documented lack of professionalism. O'Neal may be on a personal vendetta.

4. Vendetta. Kobe and the Lakers, Riley and the Heat, Howard and the Magic...it's all about the final respect, the final recognition. Just as the Celtics, O'Neal is at the end of the quest. Let's join forces. 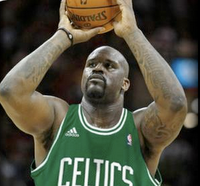 5. Shaquille O'Neal a Celtic? Just imagine. Forget the financial details. Forget the logic. Welcome the child fan in you, the NBA live or NBA 2k console player in you. Shaq playing for the Boston Celtics? Doesn't it make you smile or at least nervous? Isn't that what we need after a quite boring offseason?

Let's get the Big Leprechaun