Tony Allen Expected to Re-Sign with the Celtics 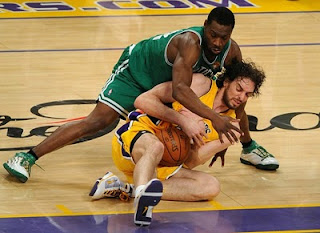 Now for some real news. Tony Allen is expected to re-sign with Boston.


According to CSNNE's Greg Dickerson, free agent Tony Allen will re-sign with Boston. Dickerson broke the news while co-hosting Sports Tonight on Thursday. "I'm told that Tony Allen's not going anywhere," Dickerson said. "He's staying here."Details of the deal were not discussed.

During this recent playoff run, Tony proved himself as a star defender. He was able to play terrific man defense on LeBron, Wade and Kobe. Now that LeBron and Wade will be playing on the same team, Boston's going to need TA to shut down at least one of them

Earlier today, Chris Forsberg tweeted about Ainge's interest in signing both TA and Nate, "Ainge on interest in re-signing Tony Allen and Nate Robinson: 'We do have interest in both of them, we always have.' ...".

So, perhaps a Nate re-signing is imminent as well.