What the Hell Happened to...Shammond Williams?

He was a 6'1 guard from North Carolina, who for awhile I used to get confused with Donald Williams, the most outstanding player for UNC during their 1993 NCAA championship.  Unlike Donald, you probably remember Shammond Williams, who did play in the NBA.

Shammond was drafted 34th overall, in the second round of the 1998 draft, after playing with Vince Carter and Antawn Jamison in college.  Although he was drafted by the Bulls, he never suited up for them, instead being traded to the Hawks for Cory Carr (not to be confused with Chris Carr).

He'd only play 2 games for the Hawks before being waived.  He then signed on with Seattle.  It was with the Sonics that Williams would have his most consistent run, playing 3 seasons with the Sonics including the 2001 campaign, where he shot a blistering 46% from 3 point range.  After the following season he was dealt with Vin Baker for Kenny Anderson and Vitaly Potapenko, in one of the Buffoon's finer moves.

He'd only get to play 51 games for Boston before being dealt at the trade deadline to Denver for Mark Blount.  After finishing that half-season with Denver, he'd go on for stops in Orlando, New Orleans, and with talented 2007 Lakers (thanks again to the Buffoon for helping our most hated enemy, while simultaneously hurting our chance to win some extra banners.)

I liked Williams and thought he'd be a good fit for the Celts when they acquired him.  I really thought both him and Tony Delk would suffice at the point guard spot in place of Kenny Anderson.  Well we remember what happened: JR Bremer wound up getting more of the playing time [Tangent time: speaking of Bremer, an excellent candidate for an upcoming WTHHT.  I never understood how that guy got playing time and let alone made All Rookie second team.  I thought he was awful.  Certainly not to my surprise, he only played 36 games after that campaign with Boston and was out of the league.  His shooting stroke made Rajon Rondo resemble Mark Price].  I think sometimes Jim O'Brien was too obsessed with defense where he'd let the worse player (Bremer BY FAR) get more playing time.


A few interesting notes about Williams.  First off, he's actually a cousin of Kevin Garnett (which I had no
idea about).  Secondly, he allegedly was the first collegiate athlete to have a website dedicated to him all the way back in 1995.  The site was known as Shammond's World, and by clicking on that, you can actually view an archive of the site. [Personally I think Celticslife should emulate the look and feel of that site for this entire summer].  Hey it's still an improvement from the Pervis Ellison tribute site =) 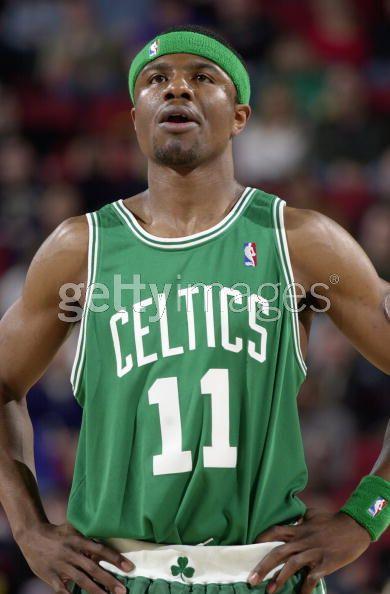 Today Williams at age 35 is still playing for Club Unicaja Baloncesto in Spain along with fellow WTHHT star Jiri Welsch, who must've been traded from Unicaja Malaga.

He is married to Lynn Williams and the couple has two children, daughter Anniston and son Shammond Jr.

***9/13*** Addendum: Shammond has since retired and is now the assistant coach at Tulane University.