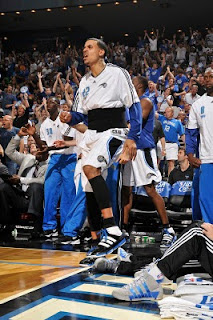 This morning in an interview with WEEI; Celtics' GM, Danny Ainge, wasn't very optimistic about potentially signing new free-agent, Matt Barnes, "The problem with Matt Barnes is that he is a terrific player, he started last year, and he opted out of his contract", said Ainge. "..so I think he has some expectations of making more money than he had than last year. All we have to offer is the veteran minimum."
While Ainge believed that Barnes is looking for more money, the Orlando Sentinel doesn't believe that to be the case. Josh Robbins writes:

"Matt Barnes and his agent are close to finalizing a free-agent deal that could send Barnes to one of the Orlando Magic’s toughest rivals.

Barnes posted the following message to his Twitter account minutes ago: “2maro is the day. I will let my fans know where I’m going to sign. Its gonna SURPRISE you!!!! Keep it locked..”

Barnes is reportedly drawing interest from both the Miami Heat and Boston Celtics. However, while the Heat are still trying to fill their super roster, they are packed at the forward position. LeBron James and Mike Miller being the small forwards and Bosh and Haslem being the PFs. Brian Schmitz of the Orlando Sentinel believes the Celtics would be the better fit, writing: "The defensive-minded Celtics might make more sense. Boston is looking for back-up help behind small forward Paul Pierce and at power forward behind Kevin Garnett after the retirement of Rasheed Wallace".

Barnes started 58 games last season, averaging 8.8 points and 5.5 rebounds. If Barnes joins the Celtics he would be backing up the player he called a flopper during the Eastern Conference Finals.