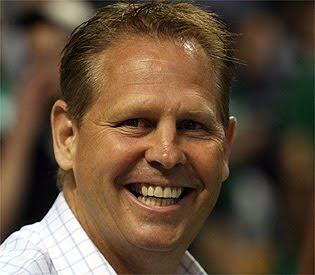 Earlier today, Ainge appeared on WEEI's Dennis and Callahan show. The interview covered a lot of topics such as why Tony got away, Sheed's retirement, how Ray Allen was injured during the Finals, Jermaine O'Neal, LeBron and the Heat, and more. Below are some highlights courtesy of Green Street:


On the LeBron James sweepstakes and how he handled himself:

[I feel] the same thing everybody else feels. It was over the top, it was too much. I think he should have told the Cavaliers well beforehand what he was doing. I just think there were a lot of things that weren’t handled perfectly. It was not fun to watch and see. I didn’t really enjoy the dance show a day or two after either, celebrating in Miami.

I like the way the Celtics have done it and our players, like Ray [Allen] and Paul [Pierce], it’s hard to get them to even talk to the media after they sign new contracts.

I think they were inappropriate and I don’t think that’s the right way to handle it either. [They’re] understandable, but not the right way at all.

On the Celtics’ prospects against the new Miami Heat:

On losing Tony Allen to the Grizzlies:

Well, first of all, we didn’t let Tony Allen get away. Tony wanted to play, he saw his role here. I think Tony can answer that question more, but we were in the same ballpark, money wise, and we don’t like outbidding [other teams] to keep our own players, but I really believe Tony wanted an opportunity to play more minutes and play a more significant role in the NBA. He’s been playing behind these guys for a while and he wants to show what he’s capable of doing. You got to remember Tony played five minutes in Game 7 and that was the best defensive performance of our entire season. We held one of the top offensive teams to 34 percent shooting. So Tony is wanting to expand his career and play a bigger role and show he can do more than just play defense.

On picking up Jermaine O’Neal:

Well I was there, front row watching that series [against Miami] and Jermaine did not play well against us. What happened was Jermaine had an ankle injury, he was hit. In fact, he’s still got to do some rehab over the next few weeks on that ankle to get it better for the season. [It was] a pretty serious ankle injury that he was playing with.

What was funny is when this whole process started, everybody knew we needed a center, nobody more so than [Kendrick Perkins]. Perk came into my office and he gave me a couple of names and one of the names was Jermaine O’Neal. That was one of the first things I said to Perk was, “Boy, he had a decent year, but he sure struggled for possession in the playoffs.” And Perk said to me, “Don’t hold that against him. Every big man plays bad against me.” Right on down the line, all the guys on the team agreed that he was the best big man available. He’s 31 years old, they played against him, they know Jermaine and I think it was pretty unanimous that he was the guy we would go after.

On if O’Neal will be motivated enough to play for the Celtics for $6 million:

You know what, I don’t think he was unmotivated [with the Heat]. When guys are hurt, it’s hard to play. It may seem uninspired and unmotivated, but I don’t see it that way. I’ve seen Jermaine play a lot of basketball over his career and I think he’ll be very motivated. There were a lot of good teams out there that were fighting for Jermaine and I think that’s an indication of the true Jermaine. I think that small sample size of this year’s playoff series was not an indication of who he really was this year.

On the possibility that Shaquille O’Neal could join the Celtics:

On Rasheed Wallace returning for another year:

I think Jermaine is younger and I think that Rasheed gave us the kind of performances in the playoffs in stretches that we hoped we would see more in the regular season, but I would hope that Jermaine has a little bit more left in the tank than Rasheed.

On holding on to a lot of pieces from last year and not making many changes:

I think that everybody likes to use that word, change, but hopefully you’re progressing. You don’t make change for change sake, but you try to make upgrades into the system and I think that we have time. We’re still trying to do that and that’s where the challenge is. I don’t want it to get stagnant or stale and I think that we can make some changes that are significant. At the same time, I don’t want to make too many changes because the reason that we’ve had success, especially last year, I thought our playoff success had a lot to do with the fact that our team had been together. The core guys that had been together and had been in the system just turned it up and were able to have an unbelievable playoff series against Miami and Cleveland and Orlando to the stretches of the NBA finals.

On the possibilities of making another run this season:

Yeah, for two reasons, I think that I saw a much better [Kevin Garnett] in the playoffs than we had all year and KG told me once the season was over, how much better he felt than he had felt all year long. He was doing his strength training very late, so I’m encouraged by the possibility of that KG coming back and being better this year.

I saw a very good Ray Allen. Ray Allen got hurt, had a very severe thigh bruise that nobody really talked about in the NBA finals after he had a spectacular game early, in the third game. He had a severe thigh bruise; his legs looked about two inches bigger and all black and blue. Ray had a terrific year, he had his best year of his career shooting inside the arc and then he really stepped up and shot the ball outside the three-point line in the second half of the season, so I’m encouraged that Ray has a lot more left in the tank.

Paul was hurt, too; Paul was not 100 percent during the regular season. When he was 100 percent, Paul played great last year. With those guys at those ages, Paul and KG, Jermaine, there’s no reason if they can get healthy, they should be terrific players still.

On the likelihood that the majority of the older players could make it through the whole season uninjured:

Well, no, I understand that that’s a possibility, but through that. Obviously, Rajon [Rondo] is carrying a big load, we need another big man, we need backups for Paul and Ray and that’s why we’re trying to fill out the roster. I think that I’m not worried about a two week injury, or a three week injury, hopefully we can survive through those kind of things, the aches and pains of the season, but hopefully we don’t significant [injuries].

I felt all along that they were both coming back, but I understood the possibility that it might not happen. I really am not sure that Doc’s decision was much different from the year before and the year before that, other than the fact it was publicized. So there was a lot of talk about it. I think that Doc does that every year, I think he evaluates the whole situation and he comes back. I felt very strongly that he was going to come back; although there was a time during the season that I felt like Doc was frazzled and that it was a tough, tough year for a lot of different reasons, so at that time, I could see that happening, but as the season went on and the playoffs [happened], the team was responding and playing well, I felt that Doc would be back next year.

On why Doc had such a difficult time this past season:

Well, I thought that the team was underachieving and with all the injuries, as he saw some of the guys, I think he wondered what direction they were going and he was very encouraged in what he saw in all the players late in the season and in the playoffs, so I felt that he would come back. It was so publicized, once the story came out that he was — I made the comment at the time that it wasn’t a story, but I guess it was a story because he does that all the time — but I felt that he was coming back and I’m certainly glad that he did.

I did not talk him into coming back, I knew that I wanted him to come back and he knew that the organization wanted him. It was just a matter of doing what he usually does, but without the usual fanfare of the media attention.

On where the team stands with other free agents, like Josh Howard and JJ Redick:

Well, J.J. Redick is out of the picture for everybody except Orlando and Chicago. He’s signed a contract with Chicago, and Orlando can match it, so he’ll be in either Orlando or Chicago.

The problem with Matt Barnes is that he is a terrific player, he started last year, and he opted out of his contract so I think he has some expectations of making more money than he had than last year. All we have to offer is the veteran minimum.

On when Kendrick Perkins could return to the lineup:

First of all, I don’t know the answer to that. It’s projected that he’ll be back probably after the All-Star break, could be my guess, sometime in mid- to late February. We’ll be very careful with Perk and not be in a rush to get him back, but I guess there’s a chance to get him back probably a little earlier, that’s probably realistic.