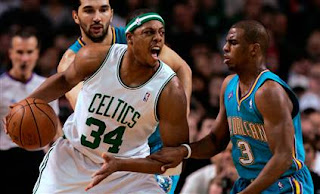 Paul Pierce: "I never once thought about leaving the Celtics. I just wanted to ensure i could retire a Celtic."

You look at all these players signing, I wish we'd get on the ball a little bit,"

On paper, I probably view (the Heat) as the favorites."

While I do think giving Pierce $61 million might turn into the Celtics version of the Mike Lowell signing (after his World Series MVP), like Lowell, Pierce took less to stay in Boston and I can't blame him for being underwhelmed by the Celtics offseason. He seems especially bothered by T.A. leaving, but also the Celtics front office not being aggressive with all these talented players in play. As I've written before, solid players like Al Jefferson, Michael Beasley, and Josh Childress were all available for the taking, but nothing was stopping the Celtics from kicking the tires on sign and trades for players like Bosh or Boozer as well. The Celtics with creativity and the willingness to spend could of made a major splash this Summer, but have essentially sat this one out.

Perkins is out for at least half the year and might not be the same for the rest of the year, Wallace is retiring and Tony Allen is gone. That's 3 players from our playoff 8 man rotation we will be without and we've only added Jermaine O'Neal. Danny has said that the Celtics overachieved last year, so in my mind that means they need to upgrade their talent to compete this year. And that's just if you want to challenge the Lakers. We're not even talking about the Heat. With some combination of adding Al Jefferson, Michael Beasley, Josh Childress, Tony Allen and Rudy Fernandez I'd feel confident that we could hold off Miami. With the way the roster looks now? Not so much. Hopefully a little pressure from the Captain will get the C's brass up and moving.