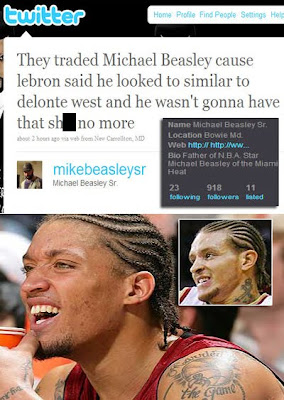 Michael Beasley's dad's tweet from today adds more smoke to the Delonte West banged Lebron's mom rumor, which came out after it looked like Lebron "quit" on the Cavs in their series versus the Celtics. At first I thought the rumor was too crazy to be true and it very likely still could not be, but this is some wild stuff. No wonder Michael Beasley became a leopard on the Heat and they were willing to dump the former #2 pick to the Wolves for nothing. Couldn't he simply have just shaved his head? Also, no truth to the rumor that Gloria James was spotted today apartment shopping in Minnesota.