"I Am Because We Are" --- Flashback on UBUNTU 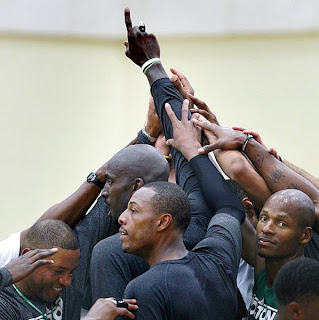 It may be the biggest advantage the Boston Celtics will have going into the 2010-2011 season, over all the other teams --- even against a "super-sized squad" such as the Miami Heat.

This team has never been the same since Doc Rivers introduced what was then a hard to pronounce word back in the summer of 2007, but thanks to that one word, the Celtics were able to win the 2008 championship, take the Orlando Magic to a full seven games in the 2009 Eastern Semifinals without Kevin Garnett, and surprise the whole world - even the Celtics Nation - in 2010 by eliminating serious superstar power (Wade, James, Howard), reaching the Finals and pushing the Lakers to the limit until the final buzzer.

Trust, accountability, freedom, teamwork... these are but the tip of the iceberg - the results that we often see from our team whenever they lay it all out on the floor... especially in big moments and in big games.

We all have Doc Rivers to thank, for introducing UBUNTU to the Boston Celtics. To the point that it has influenced not just the team, but its fan base (both in the city of Boston and worldwide) as well. We are undoubtedly one strong brotherhood. We may have our differences and not always agree at times, hey... we could even get mad at each other - but at the end of the day, we are one solid brotherhood. A family - and that's something that a lot of the fans in other teams either don't have, or are still in the process of reaching that level.
As requested, here's a detailed flashback on the story of Ubuntu, buried from one of the web files in Marquette University.

I'm reposting it on our site, but the actual article can be found here. You can also hear how it happened from the video which is exclusive to Marquette, but you can access it here.

Perhaps you've never heard of Stephanie Russell, the lady who Doc "coincidentally stumbled upon" over lunch and exchanged a few words - which would change the course of how the Celtics would ever play the game of basketball since '07.
-----------------------------------
A Powerful Word Inspires a Championship
Two former classmates see each other in passing. A word is exchanged. They go their separate ways. No big deal. Except that in this case the word inspires a man, who inspires a team, which wins an NBA championship. That’s some word.

The word is “ubuntu” (Ooh-BOON-too), roughly “I am because we are.” A Bantu term, it served as a rallying cry for South Africans battling apartheid, voiced by Nelson Mandela and Archbishop Desmond Tutu.

“When you’re building a new country and you’ve spent so long divided, with one group oppressing another, it’s a very big statement,” says Stephanie Russell, Arts ’83, executive director for Marquette’s Office of Mission and Identity.

It can also be a big statement for a newly rebuilt basketball team trying to forge a cohesive identity. “It caught me right away,” says Boston Celtics Coach Glenn “Doc” Rivers, Arts ’85 and Marquette trustee, who heard about ubuntu from Russell during a lunch break at a Marquette Board meeting. “It’s not just a word. It’s a way of life, a way of being.”

Recently, Russell and Rivers shared their memories of that conversation.

The Celtics were coming off a rough season. Nine of 15 players were new. Rivers was searching for something to unite them. When Russell explained the core concept of ubuntu — I can’t be all I can be unless you’re all you can be — he was hooked. “Right when she said that, I said ‘That’s it. That’s the word. That’s the philosophy. That’s what I need,’” Rivers remembers.

He stayed up late that night, reading everything he could get his hands on about ubuntu. Then he went back to Boston and gathered his Celtics. “Our first team meeting,” Rivers says, “I walked in front of the team and I said, ‘ubuntu,’ just like that. I said it again. One of the players, I think Kevin Garnett, raised his hand and asked, ‘What is it?’”

Rivers didn’t answer. He made everyone wait a day and then had the team’s rookies explain. “I brought them up to my office and told them this is not a joke. This is not you singing your team song here. This is very, very personal to me and very important to me,” he says.

Why rookies? Rivers knew they would work the hardest. And because, unlike the veterans, they wouldn’t be skeptical of something new.

“They were sensational, better than I ever would have been,” he says of the rookies. “And it caught the team immediately.”

The Celtics went on to become the 2008 NBA champs, buoyed by the power of a word. “I was amazed at how many times the word helped our team get through tough times. It was the perfect philosophy for our team,” Rivers says. “And it still is. Recently I was thinking about trying a different motto, and one of my players informed me, ‘No, we are ubuntu.’”

Also amazing to Rivers are the circumstances that brought the word to him. “Being in the right place at the right time was huge,” he says. “What if Stephanie had left? What if she had decided to eat lunch on the other side of the room? I honestly don’t know. Without that word our season could’ve been different.”