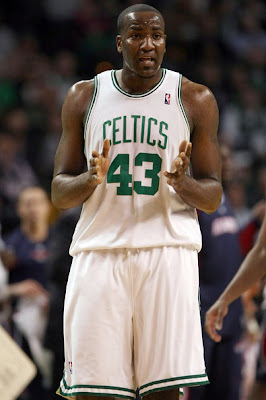 
"It's going to happen. I hope it doesn't, but you know it's going to happen," Rivers said before the Celtics practiced on Tuesday at UCLA. "Perk is physical; the Lakers are saying they want to be physical now. So the refs are going to react to that."

"Those things I think should be wiped out -- flagrant fouls, technical fouls," Jackson said. "It just means the longer you've been in the playoffs, the more penalized you are. It seems like that's not a really good code right now."

He added that the Lakers weren't as physical as the Celtics. "I mean, that's not our kind of team," he said. "We don't go out there to smack people around. We're a more resilient ballclub. We try to stay strong and play hard. But we're going to have to withstand some of that."

"What's going to happen is there's going to be a double technical that Perk doesn't deserve and we're going to have to deal with it. It's unfair, but that's the way it is," Rivers said.

I actually agree with both Doc and Phil (well at least about the teachnicals rule). The amount of playoff technicals resulting in a suspension should increase each round, or better yet, shouldn't even exist. It's not like Perkins is fighting people or even throwing Dwight Howard elbows. Like Doc said, he's getting involved with all these double technicals that refs just call instead of telling players to calm down.

I REALLY hope that Perk doesn't get suspended any game in the Finals. If he does and let's say the Celtics lose the series 4-3 I will be extremely pissed. This is why I thought that the NBA's poor attempt to save face in the aftermath of the pathetic game 5 Eastern Conference Finals performance by Eddie F. Rush and Joey Crawford was a huge deal. BOTH technicals should have been rescinded. Then we wouldn't have to worry about Josh Powell or DJ Mbenga getting tied up with Perk on purpose and the Celtics losing their defensive anchor for a game in the NBA Finals.