Breaking Down the Celtics Draft 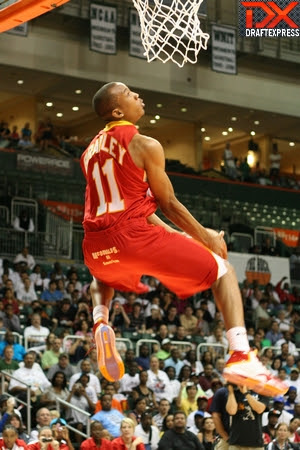 No blockbuster trades, or big name picks this year for Boston. I'm sure Danny was making his calls all night, but apparently nothing panned out. With the 19th pick in the draft, the Celtics selected Avery Bradley, a young defensive-minded combo guard out of Texas. I'm glad Boston went for young legs as Bradley only played one season of college basketball. ESPN lists his strengths as, "Quick and explosive athlete, who plays bigger than his height. Excellent defender. Can create his own shot and score off the dribble. Solid mid-range shooter." He did only average 11.6 points per game in his freshman year, and shot 54.5% from the free throw line.

So, what does this mean for this year's roster? I don't think it effects the Ray Allen situation in the slightest, but I guarantee TA and 'Quis won't both be back next year. It's really a tough call between them. I feel like if Daniels actually stayed healthy and got consistent minutes, he would be a difference maker on offense. He showed flashes of excellence cutting into the lane and finishing well at the rim. However, TA is one of the best one-on-one defenders in the league. I'm sure he also costs more the 'Quis. That will be a tough decision to make for the C's front office.

In the second round, Boston selected Luke Harangody with the 52nd overall pick. I'm unsure why this pick is getting that much less coverage than the Bradley pick. The Notre Dame forward was a prolific scorer in the Big East. He is the third-best scorer in Big East history and recorded over 20 points per game in each of his last three seasons. Harangody is also the second-best rebounder in Big East history.  He is a great post player with a good enough jumper to keep defenders from playing off him. I honestly think this guy can make a difference this year.

With Boston's lack of depth at the forward position, he may see some serious playing time. Sheed retired, Perk is out to start the year, KG won't play too many minutes in the regular season, and that leaves only Big Baby. I highly doubt Ainge brings back Shelden Williams after his terrible postseason performance. Harangody will definitely be someone to watch in the summer league, and I believe he has a higher upside than Bradley..