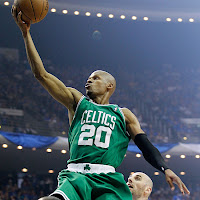 With all the story lines about Lebron James's superstar failures, Rajon Rondo's coming out party (for the third straight year in the NBA playoffs), and Kevin Garnett's reemergence as a healthy and dominant force, Ray Allen managed to fly under the radar throughout the Celtics/Cavaliers matchup. Somehow people forgot that image of Ray Allen yelling at Lebron James. But for me, that's the lasting image of the series that exposed the Cavs' already apparent weaknesses and announced the Celtics as a championship caliber team. I don't recall ever seeing Ray Allen mad before that moment he jawed at James.

I don't know what he said. The moment passed quickly and faded, but I've been thinking about it since. It showed me every single Celtics player is willing to fight their way back to the NBA Finals. I'm not saying they'll get there, but the determination is there. I shouldn't be surprised by this, but I am. After all, the Celtics found new ways to blow regular season games. But Ray Allen was the last person I expected to see yelling at any player. That said more to me than Tony Allen's defense, Rondo's control over each game, and KG becoming KG again, mainly because there had been hints of those things all season.

Well, Allen brought that fight to Orlando. Game 1 was Ray Allen's game. Pierce had better overall numbers (22 points off 6-for-8 shooting, 5 assists, 9 rebounds), and Kendrick Perkins and Rasheed Wallace shut down Dwight Howard, but Allen set the tone of the game. He attacked the rim for easy layups and drew fouls. His play turned the first quarter into an ugly back and forth of defensive possessions that played right into the Celtics' hands.

Last year the Magic held Allen in check for most of the series, and he went 8 for 42 on three-pointers. In his post-game press conference, he said, "If the shot isn't there, I got to drive it. I got to make a play." Allen didn't make a three-pointer until the 6:11 mark in the third quarter. Instead, his first 14 points (of 25 total) came off layups and free throws created by driving to the hoop. At some points in the game, including the first quarter, Allen brought the ball up the court and set the Celtics offense while Rondo deferred. Meanwhile, the Magic were never able to set and control their offense. Most of Game 1 followed the messy pace established by Allen's first quarter.

When the Magic made their final run, it briefly appeared to anyone who watched this season that it might turn into another blown game by the Celtics. It had all the symptoms: an early lead, stifling defense, and the opposition erasing both of those elements with a quick offensive run. Then Allen's final two points came on free throws that officially sealed the game for the Celtics, an appropriate ending to a game that belonged to Ray Allen.