Not So Healthy: TA Battling Pain 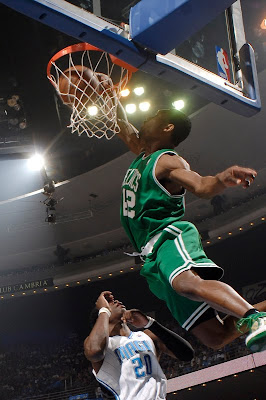 Doc Rivers: "Tony's ankle has been bothering him a lot, but he's playing through it".

Apparently, the pain was so severe that his availability for Game 3 was questionable. Rivers notes that Nate Robinson was being used as the backup point guard in the practices during the 3 day break.

This is the same injury that caused TA to miss significant time to begin the season. Forsberg writes:


"Allen missed the first 20 games of the 2009-10 season with a sore right ankle after rushing himself back from offseason ankle surgery and aggravating the injury during the only preseason game he appeared in. Despite little expectations given his injuries woes in six seasons in Boston, Allen soon emerged as Boston's most reliable bench player, providing consistent defense and the occasional offensive spark."

Tony Allen has come up big in these playoffs, surprising everyone by becoming a solid core member of the bench. He was invaluable in defending Dwyane Wade and had got some time on LeBron as well. His offense has also been impressive. He's posterized Antwan Jamison and contributed many highlight worthy plays. However, his contributions have lessened in the last two games. Forsberg writes, "Allen slowed his pregame workout before Game 2 in Orlando numerous times and appeared to be grimacing while grabbing at his right foot. Allen played only 15 minutes that night, his shortest outing since May 1".

With the injury I wouldn't expect to see Tony play tonight. Hopefully, either Nate or Marquis can step up.