Mike Brown Out as Cleveland Coach 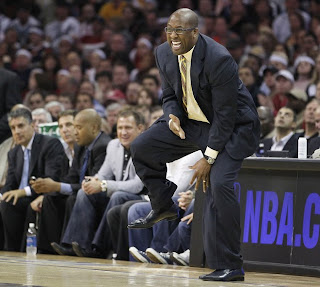 For real this time. ESPN has the story and Cavs' owner, Dan Gilbert, confirms it in a statement reading:


"After a long and deep analysis of all of the factors that led to the disappointing early ends to our playoff runs over the past two seasons, we concluded that it was time for the Cavaliers to move in a different direction...The expectations of this organization are very high and, although change always carries an element of risk, there are times when that risk must be taken in an attempt to break through to new, higher levels of accomplishment."

With LeBron James heading into free agency, his input in the process of finding a new coach may strengthen the chance he stays put in Cleveland. Many have highlighted Brown in their criticism of the Cavaliers' early playoff exit. Including James. who was never shy of critiquing the coach. ESPN writes, "James publicly questioned why O'Neal only played 49 seconds in the fourth quarter of the Game 4 loss in Boston. In the opening round against the Bulls, James campaigned to get J.J. Hickson more playing time, creating an awkward stand-off between the coach and superstar."

The firing comes right before a midnight Sunday deadline, after which the Cavaliers would have had to pay Brown his $4.5 million salary for the 2010-11 season.