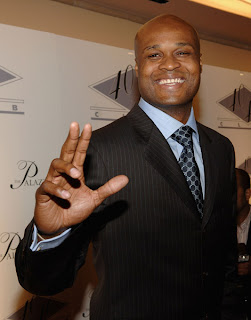 One of my favorite Celtics to watch play, Antoine Walker, a man who made $110 million in 13 NBA seasons, filed for bankruptcy on Friday. It was very disappointing to hear, for me at least. Walker was a great shooter, and was the image for the C's along with Paul Pierce from the late 90's to early 00's.

'Toine lists $12.7 million in liabilities, while claiming only $4.2 million in assets. Included in that total is his 6,000 NBA championship ring he earned with the Heat in '06. Like Allen Iverson, Walker enjoyed living the superstar life. He gambled excessively, and payed over $5,000 a month for clothing, training, car payments, recreation, and housekeeping. The former-Celtic is asking to keep his home in Miami, valued at $2.34 million and his Range Rover, valued at $54,000.

So far in this article, I have referred to Antoine's playing history in the past tense, but his days on the hardwood may not be done. With the financial debt he's faced with, making a comeback to the NBA may be his only chance to get out of the red. Walker is rumored to be training with his college coach from Kentucky, Rick Pitino. When asked about potential comeback, Antoine said he has only "one shot" to make it back into the league.