What the Hell Happened to...Bryant Stith? 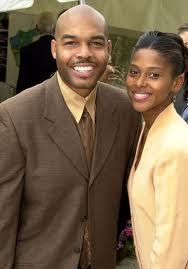 He was a 6'5 shooting  guard from the University of Virginia, one of 6 UVA players to get his number retired.  He was part of one of the NBA's most famous upsets in playoff history.  He only played one year for the Celtics but he started 73 of the 78 games he played.  You may remember Bryant Stith.

Stith was drafted in the first round by the Nuggets in the1992 draft with the 13th overall pick.  However that season would be marred with injuries (he broke a bone in his right foot in November of '92 and then broke the second metacarpal in his right hand in April of '93) limiting him to just 39 games.

However in his second season, Stith would shine.  He played and started all 82 games that year, averaging 12.5 ppg in 35 minutes per night.  And it would be during that postseason where the 8th seeded Nuggets would come back from a 2-0 deficit to beat the top seed, best-record-in-the-league Sonics in 5 games.

Stith would go onto play the next 6 seasons in Denver, predominantly starting at shooting guard for almost all the games he played.  In 1997 he'd average a career high 14.9 ppg.  In October of 2000 he was dealt to Boston, along with Chris Herren for Calbert Cheaney and Robert Pack.  Herren seemed to get most of the attention in that deal since he was a Boston native, but Stith was the best player in the deal.  That season he'd average 9.7 ppg in about 32 minutes a night.  When he had entered the league he was a spotty 3 point shooter but really had improved it by the time he got to Boston, shooting a very solid 38% from downtown.  That was the year where you'll recall the Evil Emperor resigned in January and was replaced by Jim O'Brien.

Stith would go on to sign with the Cavs that next season.  He would be traded to the Clippers after that year but never played for them, deciding to retire (which makes that picture to the left all the more cool).  He was upset at that time, blaming franchises (likely the Clippers and Cavs) for discarding him in favor of younger players and ending his career prematurely [Tangent time 1: I for one totally agree with Stith and wish this wouldn't be the case that it seems to be.  That is, younger guys get a crack at the rotation because they have more potential and older players, who are actually better players at that very same point of their careers, get pushed aside (except for the 6 or7 teams gunning to win it all).  It's an awful trend in the NBA, and not one that I expect to go away anytime soon].

I liked Stith a lot.  I thought he was a classy guy and thought he maximized the most of his abilities.  He was a tough defender and an excellent foul shooter.  I was actually disappointed when he left Boston after his one season to sign with the Cavs.  In hindsight he would've been a great fit on that 2002 team that underachieved and went so far [Tangent time 2: Although I'm not sure if he would've gotten minutes.  I suppose he would've battled with Eric Williams (with Pierce sliding to the 3 for Stith to play the 2) or Erick Strickland and Tony Delk.  Then again maybe if Stith were in the mix there wouldn't have been the need to acquire Delk and Rodney Rogers and the Celtics would still have Joe Johnson today.  Then again, they wouldn't have gone as far as they did without Rogers in those playoffs.]

Today Bryant continues to live up to that reputable image by embarking on a number of different activities.  Bryant is a member on the Board of Trustees for St. Paul's College in Virginia (who by the way, have one of the worst-looking websites for a college I've ever seen lol).  In the likeness of Chris Carr and Eric Riley, he is also the Founder and Executive Director of S.C.O.R.E. (Setting Children On the Road to Empowerment).  Their mission statement is to "provide programs and services that stimulate and promote the physical, mental, economic, social, and spiritual development of youth and families residing in Southside Virginia."
If you look at the website, you'll notice he's helped build a wonderful facility known as the SCORE Recreational and Training Center.

But that's not all (this is becoming the most informative WTHHT segment).  Bryant also has a car detailing business and in the likeness of Derek Strong, has become involved with NASCAR, where he owns Team SCORE Motorsports.  He also has become the head basketball coach of his former high school Brunswick High which is located in Lawrenceville, VA.  He resides in Lawrenceville with his wife Barbara and their 4 children.