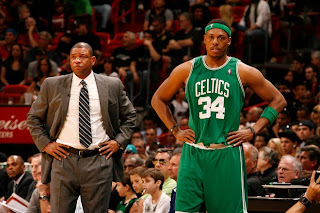 The fact that the Celtics couldn't find the broom yesterday was concerning to me. Maybe I'm greedy but I was ready to be dissatisfied with anything less than a sweep. Is that really asking too much? After all of the horrid performances the Celtics have delivered this season, what would have been greater and more seemingly unlikely than disposing of the Heat in four games? Many had this series going 6 or 7 games. Many also had the Celtics losing. However, Boston came out of the gate and surprised everyone. They played with energy, emotion and urgency. They were trying and fans forgot what that looked like. However, I would only be sold on the flip-switching idea if Boston were able to close out on the road. After finishing Game 2, Doc Rivers pointed out, "At the end of the day, all we've done is won two home games". Game 3 was great but if Pierce's shot had landed a little to the right, we may not be saying that. Last night's loss  doesn't help to convince me that this team is on track to the championship.

The only thing that's been keeping the Heat competitive is one man, Dwyane Wade. The Celtics have a problem in Wade. Yesterday, they let one man take on their entire team and win. It seemed like he was sick of waiting for the rest of his team to catch up and decided to take matters into his own hands. It's hard for me to picture the Heat locker room after the game. If all of the players were excited that they'd won a game, the fact must've been lingering in the back of their minds that, "Oh, Wade just gave us that one". He racked up 46 points and was 16/24 from the field. His 16 shots made were more than the next highest team member, Quentin Richardson, even attempted. 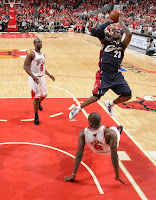 The inability to contain a superstar is something the Celtics are sure to have trouble with going forward, namely, against Cleveland (if they don't blow this series). For the most part, the Celtics have done a good job of shutting down Wade's supporting cast, albeit a weak one. You're not getting too many high fives for stifling Carlos Arroyo. The Cavs on the other hand have a much more skilled set of characters around Lebron. There's a reason the Cavaliers had the best record in the NBA. It's not all Lebron (just 90% as opposed to the 98% it is with Wade and the Heat).

Boston has lost 6 of the last 7 games where it could've closed out a series on the road. In losing yesterday, the Celtics missed out on giving the fans a treat. A sweep would've made a statement. It would've been something hard to ignore. I'm not saying that they can't go on to succeed now that they haven't swept. But, I do think it would have been nice. As Doc said, when talking about if 1 out of 2 in Miami was good enough, "No, you gotta be greedy".