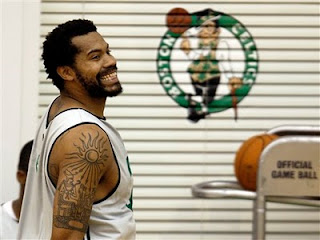 There were a lot of questions surrounding Tuesday night's game at the Garden. Namely, how would the Celtics fare without Kevin Garnett in the line up? After being suspended for a (minor) scuffle with the Heat's Quentin Richardson, it was believed that Big Baby and/or Sheed needed to step up big. Well, Baby got the start and excelled in the heightened role, netting 23 points and was +24. Sheed? Not so much. While everyone else seems to have flipped their switch into second-gear, I think Sheed's still trying to find his.

Wallace's performance was only average Tuesday night - nothing to write home about. However, his numbers did improve with Garnett watching from home. Sheed played for 21 minutes, 7 more than in Game 1. The added playing time allowed "The Lazy Chucker" to net 2 more points than he did Saturday night, for a total of 6. He also contributed 5 defensive rebounds to Boston's 40 total. All positives, as slight as they may be. However, as it always is with Sheed, there were some negatives.

Rasheed did attempt a 3-pointer this time (which he missed, of course) and was -12 in the game. To be honest though, most of his negative stats that night weren't so much his fault. His most glaring issue (and what made me sigh the most) was that, in the first quarter, he was whistled for two fouls in about 30 seconds. One of which was a technical. However, both of these fouls were bad calls and deserving of his famous facial expression. Including the technical, Sheed totaled 4 fouls for the whole game. One of which came around 2 minutes into the second quarter when Shelden Williams decided to break to Arroyo, leaving Jermaine O'Neal with a wide open lane to the basket. Sheed was forced to foul him. Not his fault.

With Garnett out, many were hoping the Celtics' big off-season signing would show why he was brought here for 3 years. He didn't. But ultimately, he didn't have to. The rest of the Celtics were more than capable of handling the Heat in a blowout at the Garden. Still, Celtics fans are waiting for Rasheed to turn it on in the playoffs. This is the time that apparently gets him going. And so far, he hasn't. Though two games is a small sample, Boston fans have watched the apathetic giant slowly jog up and down the court all season long, turning in sub-par performance after sub-par performance. Sheed owes us a noteworthy, better than average game, and many of them.