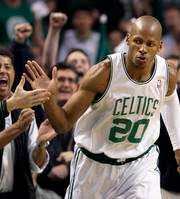 Who needs the Big Ticket when you have the Big Ticket Stub? Glen Davis started in place of KG, scoring 23 points and grabbing 8 rebounds and Ray Allen looked like MJ in Game 1 of the 1992 NBA Finals with 7 three pointers in a blowout Celtics victory.  Hopefully Davis will be ahead of Wallace in the rotation from now on. The crazy thing is he probably could have had 40 if he made all of his layups. It makes me sad to think about what type of player we could have if we combined Rasheed's length and overall talent with Big Baby's effort. Ray's mom was in attendance tonight so I don't think it's any coincidence he was on fire. I think it's clear that we need all the Celtics players mom's to come to every game from now on.

Overall, it was an inspired and dominant performance by the Celtics and a downright pathetic one by the Heat.The Celtics lockdown defense was back in full force.  Combining that with the putrid Miam Heat offense and you get a 30 point blowout.  The Heat should be called the Miami Wade's because that is all they have.  He dropped around 30 and the second highest Miami scorer had 11. Wade should call them out Larry Bird style afer this game.  I feel bad for the guy because there is no more explosive talent(besides Lebron) in the league.  I was so happy to hear the boos of Richardson everytime he touched the ball.  Try winning something before you talk trash again Quentin, thanks.

I was glad to see Sheldon get some minutes. The guy plays hard and deserves 12-15 minutes a game. Rondo didn't play all that great yet we still won by 30.  This has to be the best news of the night. As expected Pierce had just an average night. I think there is an unwritten rule that says Ray and Pierce can never play well in the same game.  Perk played well defensively and on the boards, but continues to hold the ball too long everytime he gets near the basket. If he ever learns to just go up with his shot he could average 16-18 a night easy.

I think it's clear that Big Baby is one of those players that is just better as a starter. We saw how well he played in the playoffs last year and when he got his chance this year he did the same. Some people are just meant to start. Unfortunately you can't start him with KG in the lineup, but let's hope he still gets starter minutes.  We will need Rasheed's length against the Cavs and Magic if we play them, but against this Heat front line Big Baby is better.

Let's not jump ahead of ourselves Celtics fans. Remember, the Heat still have Dwayne Wade and this is still a team that has made a habit of collapsing for long stretches this past season. However, for at least a night let's rejoice in the fact that the Celtics made us remember 2008 again with our tough defense and clutch shooting. We can't let up in Miami. Sweep the Heat!