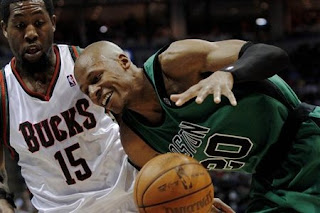 With the 2009/2010 Jekyll and Hyde Celtics you never know what to expect. Tonight we got the good version as they brought the effort and defeated the Bucks 105-90. This could very well be our first round opponent and the game had that playoff atmosphere. Pierce led the Celtics with 24 points. Rondo had a 15/9/5 line and Baby and Rasheed both chipped in with 12 and 7.
Let's see if we get Jekyll or Hyde against Chicago.