Coming into tonight's game against Sacramento, I was feeling pretty confident we would come out with a win - not just because of the Kings' overall record, or that they'd only won three of their last ten games coming into tonight, I just had that feeling... that feeling I'd gotten used to two seasons ago, the same one I had in the beginning of this season... it's back. Then as the first half was winding down, I was ready to write the game's recap. How quickly we die-hard fans can slip back into our blissful all-is-well-with-our-C's mindset when things start to go our way.
What I anticipated writing at half time isn't exactly the tone that carried over through the rest of the game. Here's how the recap started at the half: 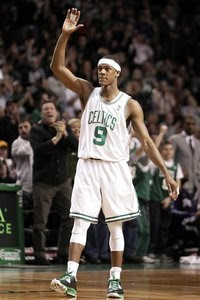 Oh yeah, baby (no, not you, Glen) we are BACK. Ray has shown up per usual with his you-can-count-on-me play, KG is hustling, pulling down 6 rebounds within the first five minutes of the game, doing the Ally-Oop with Rondo, who's having a sensational first half, Pierce is the TRUTH, Glen Davis appears confident. There is energy and quickness all over the court. These are our guys. This is our time...
Well, that's kind of where I was going until I noticed it was beginning to read like a speech for a political rally. Not that the above isn't true. Boston came out of the gate ready for this win. Though Perk was out with tendonitis in his left knee, Sheed had a strong first three minutes before sitting down with two fouls, and Davis stepped right in with energy and focus. Up by fifteen at the end of the first quarter, 32-17, it looked like they might just breeze through this game - and no, I haven't forgotten all those games when they fell apart somewhere in the second half, but they are definitely not coming apart as they once were earlier this season.
Shelden Williams came into the game with 2:30 left in the first quarter - he was quick, got a few strong boards and scored 6 points tonight - in total he played over 22 minutes, which was good to see. The second string played most of the second quarter and not only got some quality playing time individually, but time to work together as a unit. Nate Robinson was out of the game with seven minutes left in the first half, having sprained his left ankle. Ray had 15 points by the middle of the second quarter and just made it look easy, as he so often does. Rondo was on fire when it came to assists (18!), and also became the Celtics all-time leader in steals in a single season.

KG just ROCKED tonight - he played with an intensity and energy that just made you feel good watching him. He finished the night with 18 points and 13 rebounds in just under 26 minutes. Pierce brought in 22 points, 8 boards and 2 steals - solid Paul Pierce all night. Just before the half Pierce was called for a foul when clearly he had blocked Carl Landry's shot - the ref said he had hit Landry on the elbow... uh, no he really didn't. Landry, however, did have a game high 30 points, and both he & Beno Udrih are what kept Sacramento in the game.

Boston had a twenty point lead, 57-37, going into the second half. In the third quarter the game got closer... Glen Davis was called for a Technical foul and the official got that call right. Big Baby really threw Udrih down and it just wasn't called for. Doc did not look happy, and Davis would spend the rest of the game keeping the bench warm. By the end of that quarter, Sacramento was within thirteen - 74-61.

Then the fourth quarter, where the lead was down to ten points - then eight points - seven points... that's about the time it felt like I had a basketball stuck in my throat, but I still felt pretty confident we would pull out a win, which we did. Final score, 94-86, and the Celtics not only add another to the win column, but it was a win at home.