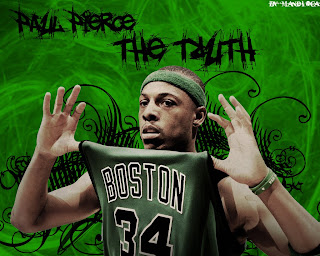 Now that's what I call a good win. The Celtics defeated one of the NBA's elite teams on their court on the backside of a back to back Texas trip. The final score was 102-93, but it was close throughout, with the C's coming up stronger in the end. I'm not one to get too high on regular season wins or too low on regular season losses, but if you want a game to pump you up, this was it. You don't win banners in this league without superstars and players capable of putting in 30. A funny thing happened to the Celtics in the past two weeks, the return in play (not just name) of Paul "The Truth" Pierce. He looked like 2008 playoff Pierce tonight. He's averaging 28 points per game over the past three games and his demise was obviously greatly exaggerated.

Our starting backcourt tossed in 41 points, with Rondo adding 10 rebounds. Dirk led "Los Mavs" with 28 points. Some other observations:
If you missed this game because you were out do to the nice weather, it being a Saturday night, or you were suffering from hoops exhaustion after watching so much college basketball, I highly recommend you find someone who DVR'd it and watch it now. You'll feel much more optimistic about the playoffs... and that's the Truth.