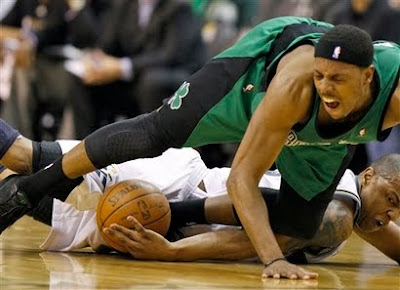 
Perhaps this qualifies as paranoid speculation, but on a day when Celtics forward Paul Pierce underwent X-rays on the foot he injured in last night's victory over the Wizards, it is at least curious that his teammate, backup forward Shelden Williams, would cryptically tweet the following at 3:20 this afternoon:


@SheldenWilliams: Man when it rains it pours!!! Yall will find out what I mean soon!!!!

As I've been saying repeatedly, losing games in January is no big deal. Losing Pierce would be. Hopefully Shelden isn't referring to Pierce who went in for x-rays on his foot today and he's simply implying that Candace is going to be mad at him about something this evening. Point is people shouldn't get bent out of shape over a loss by 1 in the middle of the season. Does anyone even remember if the C's won or lost the game KG went down in last season?