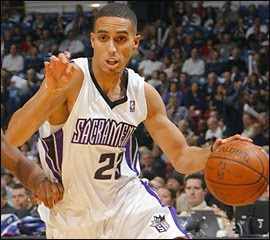 Well in my opinion Danny blew a great opportunity to acquire Caron Butler this past weekend. All Washington wanted was expiring contracts. Dallas was refusing to trade Howard's expiring contract straight up for Caron. They were demanding they also get Haywood. A compromise was made with Dallas also taking Stevenson's contract and some cash to pay it off, as well as Butler and Haywood. So it seems that Danny could have had Butler and filler for Ray straight up. Disappointing.

Now there is a glimmer of hope that the Kings will trade Kevin Martin for an expiring contract if the other team will take Nocioni and his contract. Danny (and Wyc) HAVE to make this happen. It's not that I dislike Ray, but he's the only one of the big three that will bring anything back. Martin is 8 years younger and will give us much more moving forward than the soon to be 35 year old Ray Allen. He's a lethal shooter, who's young and long enough that playing with KG and in the Thibs system has the potential to improve on defense. I mean Ray is getting beat by JJ Reddick now, so it won't be hard to match that defense. Philly won't trade us Iguodola. Hinrich isn't a good enough addition. It's Kevin Martin or bust. C's missed the boat on Caron Butler. Only one more opportunity left. Make this happen Celtics!