The Curious Case of Rasheed Wallace 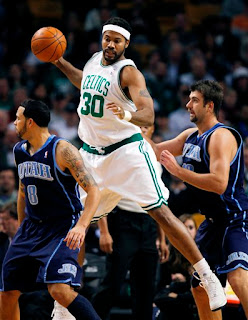 It doesn't make sense why a 6'11", long armed,  extremely skilled player with a deadly turn around jumper settles for threes again and again.  I don't even care if he was 100% from three this year.  The fact that he has been missing a lot more than making as of late, makes it that much worse. Look, at the start of the year I wrote about how I loved the fact that Sheed can stretch defenses, and I still do.  At the same time, I don't want him jacking up contested threes when he could be posting up smaller forwards and rebounding inside.

I don't care about Rasheed getting technical fouls. I'd rather have him get a technical every game than jack up threes all day.  I wish Wallace had more of "Nasty" Daniels's decision making.  We know this guy can have his way down low because we have seen it. Why do players try to make the game harder than it is? If Rasheed really wants to hold true on his prediction of beating the 96 Bulls record for wins, he needs to get down in the post and stop playing like a shooting guard. Happy Friday the 13th everyone!