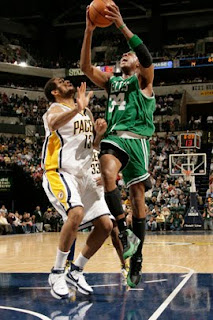 We all love the Celtics. Sometimes I think that love blinds us to the reality of the situation. The Celtics are a very good team but not a great team just yet.  It doesn't mean that by the end of the season they can't be great, it just means there is room for improvement.

The Celtics lost for the second time last night to a talented, young Hawks team. However, I don't think there is anything to worry about.  First off, remember we are still 8-2 and without one of our best players off the bench in Big Baby Davis.  Our two losses have been to two teams that have a chance to go deep into the playoffs.  The important thing is to be playing well in April and to be healthy.  Would home court throughout the playoffs be nice? Of course it would. But I would rather be healthy and have the 2 or 3 seed, than injured with the 1 seed.  Let's keep playing the bench big minutes to get them battle tested.

Rasheed Wallace obviously didn't read my article yesterday.  He is jacking up threes like Antoine used to, but no one is calling him out.  In fact, this is worse than Antoine cause Rasheed is almost 7 feet tall! Garnett needs to have a closed door chat with him and get him in line. He's too talented to keep bailing out defenses.

Tonight's game against Indiana is one of those dreaded, second night of a back to back away games that kill veteran teams like the Celtics.  The Celtics need to have a solid showing against an overachieving Pacers squad.  If they play like they did last Saturday night against the Nets, they will lose this game.  I'm still waiting for a breakout game from Ray Allen and I hope to see it tonight. Here's hoping the C's get back on the winning track!