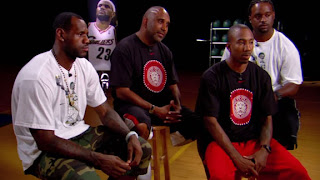 This whole Lebron James free agency story has become a circus. I remember when Shaq was a free agent back in the 90's and a decade ago when the big 3 free agents were Tim Duncan, Grant Hill, and T-Mac. All of their free agencies combined didn't cause as much craziness as LeDiva James and his "team." His team for the uninformed are his childhood friends who have been causing havoc in Cleveland since Lebron got there. The leader is Maverick Carter. Besides his "team" there's also William "Worldwide" Wesley (You must have a nickname to associate with the King with no ring). The two of them are fighting over who will be Lebron's future BFF. Those are the leaders, but there's so many in Lebron's entourage who can count. Basically Lebron gets them any fake job they so desire.

Unlike past free agents who were simply players, Lebron wants more power in his new location than he even had in Cleveland (where the owner essentially let Lebron play GM, but Lebron was still not satisfied). Lebron's people have been telling teams what coaches to hire and what players to get. The best story was Maverick Carter telling the Clippers that Lebron would go there in a package deal with a new owner. So in order to sign Lebron you might have to also give up your team right?

Well CelticsLife through some sleuth investigating has uncovered 10 more demands that Lebron and his team have for any team interested in signing him.