Brogdon “In the Zone” as Celtics get even with Chicago 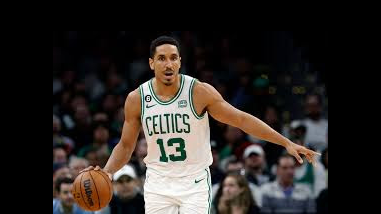 We’re 18 days and 131 total games into a new season – a season in which yet again league-wide usage of the three-point shot hovers just under 40 percent. It was a mere five seasons ago when only the Nets and Mike D’Antoni’s Harden-led Rockets posted a 3PAr north of .400 … also the first season that the average NBA team posted 10 successful 3FG’s per game.
In today’s NBA, double-digit treys in a ballgame has become a mandatory component of play – only 52 times in this season’s 262 team performances (just a shade under 20%) has a team failed to drain 10+ 3FG’s. In four games, both sides came up short, while in the other 44 contests, fewer than 10 three-balls resulted in 36 losses (.182). 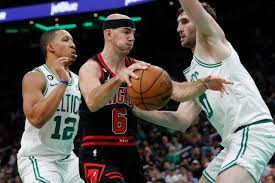 The Celtics posted the most recent of those eight “anomaly victories” last night at the Garden, repaying the Bulls 123-119 for a set-back in Chicago a week-and-a-half ago while shooting an uncharacteristic 9-for-31 from Three-Point Land. (Incredibly JT’s 3-for-10 effort did NOT lower the team’s overall 3FG% of .290!)
Malcolm in the Middle
Despite his team-high four Turnovers, Malcolm Brogdon delivered a glorious performance (9-for-10 from the field) in his best effort to date as a Celtic … MB’s 25-point explosion enabled bench-mates Hauser, Kornet and Williams to post the highest +/- counts for the game (though I’m scratching my head over how Brogdan wound up at just +4). 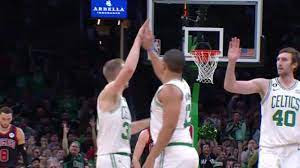 Boston compensated for its relatively poor shooting night from deep by attacking the basket – over half (42 of 83) of their shots were taken in the Paint, where they outscored the Bulls 52-34. [The C’s were also accurate from the Mid-Range, going 6-for-10.]
For the record, Mr. Brogdon did not attempt a single three-point shot in his 29 minutes on the floor (his most floor-time of the season, BTW), though shooting a respectable .375 for the season from behind the arc.
I never understood why the Bucks decided to trade away (for only draft picks, mind you) a steadily improving Brogdon, opting instead for flashy-but-streaky Eric Bledsoe (although Jrue Holiday was ultimately acquired to be the final piece of a championship puzzle).