Warriors decide on no suspension for Draymond Green 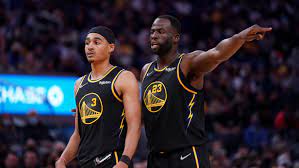 He has been fined but not suspended. Kerr says he will play in the team’s final preseason game on Friday, and will be available on opening night.

In the end, Draymond got his punch in, got to take a short vacation, and will only have to pay a small fine. Since this was the Warriors in house decsion and not the NBA or its refs in the NBA Finals or anything, I didn't really care much what the Warriors decided. Me thinks if he had punched Steph Curry or Klay Thompson though he would have gotten suspended.

Maybe if the NBA you know called a 2nd technical foul on Draymond in Gm 2 vs BOS when he was continuing to be an asshole, he might have learned a lesson that actions matter.