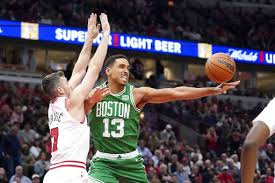 A Second Quarter from Hell – a measly six conversions in 25 tries, as opposed to the enemy’s 17-for 25 showing – squandered a magnificent 39-point Q1 in which the Green Team at one point enjoyed a 19-point advantage. Despite a Marcus Smart prayer-answering, banked three-pointer less than a second before the intermission, Chicago entered halftime with a 11-point edge.
Coach Joe’s boys began the second half with a 12-4 flurry that cut the lead to three points … but Billy Donovan’s boys responded with a 15-2 run of their own, and their lead never again dipped below 12 points.
Boston’s “J Team” accounted for 47 of the team’s 102 points – for the season, the two young studs have contributed 226 of the team’s 465 points (an astounding 49 percent of the C’s output) … though JT’s rather pedestrian 26-point effort against Da Bulls did drop hm from first to sixth among the league’s top scorers.
Maximize your Stripes
Opening night against the Sixers, the Celtics won despite making fewer three-point shots (12-13) and missing more free throws (6-4). The tables were turned Monday as Boston lost despite making more treys (18-10) and missing less from the foul line (2-3). 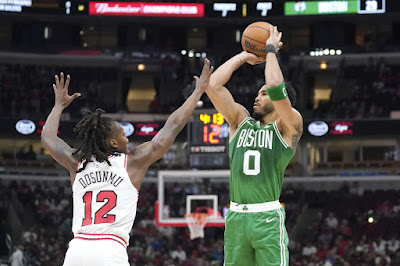 Through seven days and 51 games, an NBA team has both (a) connected on more three-point shots and (b) missed fewer FT’s than its opponent 18 times, coming out the winner in 12 of them. (Boston has turned that little trick in each of its last three games.) Cleveland (2-0) as well as Philadelphia and Charlotte (each 1-1) are two-timers.
During the ‘21-22 season’s 1,230 games, a team had more treys and fewer “FT misses” than the other guys 585 times, winning 407 (.696) of those contests.
If we just consider successful three-point shots, this advantage is even more tilted. The team making more treys than its opponents was 35-11 (.761) during Week 1 (threes were even in five games).
Last season, teams were even in makes from behind the arc in 81 games – in the other 1,149, the squad making more treys won essentially two out of every three (767-382, .668).
BTW through one week’s play, Boston owns the NBA’s highest usage rate for treys (3PAr) at .468 – nearly half their FGA’s.
Abacus Revelation for the Road
Does anyone else wonder if Joe Mazzulla was dipping into the Auerbach playbook Monday evening, provoking his own ejection ??