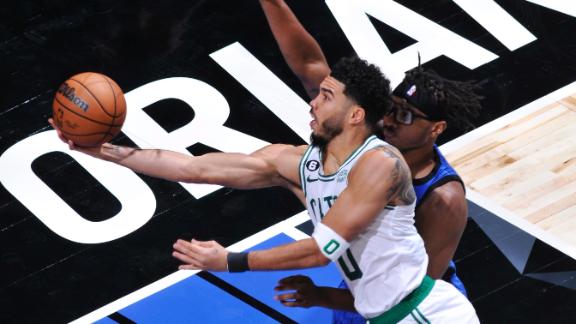 While Jaylen Brown’s offensive exploits were grounded by a less-than-pedestrian 4-for-16 shooting performance, teammate Jayson Tatum’s early-season exploits remained in the stratosphere with a 40-point explosion Saturday in Central Florida as Boston eked out a 126-120 shoot-out with the long and athletic Orlando Magic.
JT currently sits atop the list of league-leading scorers at 34.7 ppg. And Grant Williams continues his torrid shooting pace, his three-for-three showing boosting his top-ranked FG% to .857. 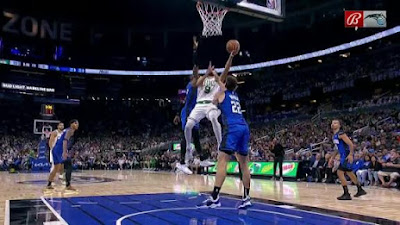 Brown’s “slack” was picked up quite ably by Derrick White, who contributed the highest scoring output of his Celtic tenure (third-highest of his career) with 27 points in 37 minutes of action. DW’s timely effort would seem to validate his inclusion in Coach Joe Mazzulla’s season-opening starting line-up.
Perhaps it was in deference to the length and athleticism of the young Magic players. But Boston upped the ante on its usage of the three-point shot – 47 of their 87 FGA’s were three-balls, a usage rate (3PAr) of .540. (Sheesh!!) Both squads were extraordinarily accurate from distance in this game, as well (combined 34-for-81, .420).
The back-and-forth contest – a back-to-back for both sides – featured 17 ties and 21 lead changes. The young Magic actually recorded more conversions than did their guests. Orlando connected on 45 FG’s to Boston’s 42, and each team earned 11 trips to the foul line … but the Celtics’ four more successful treys and three fewer misses from the free-throw line tipped the scales in their favor.
Abacus Revelation for the Road
Through three games, Coach Joe’s crew is shooting 69-for-109 (.633) in the Paint, opponents 63-for-118 (.534).