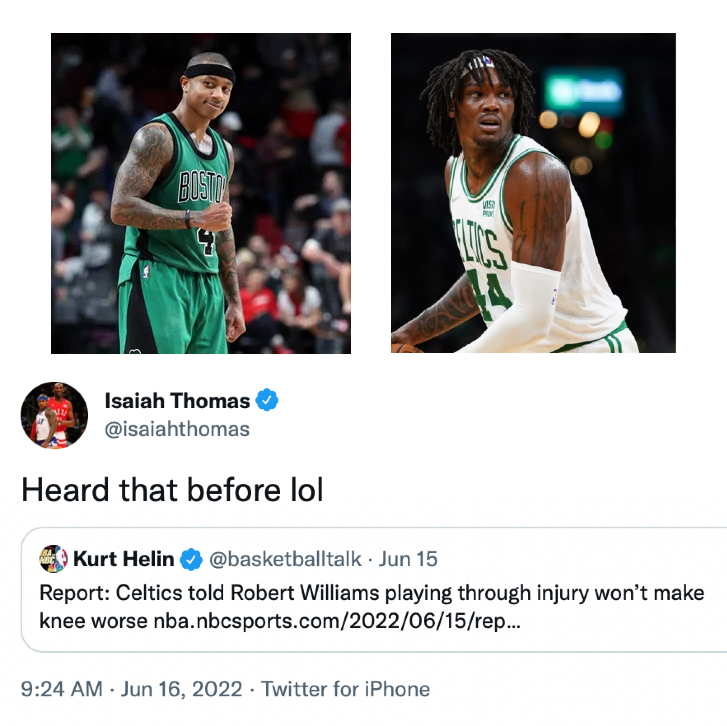 A bit of a 180 by Isaiah Thomas on the Celtics right here. If you recall Thomas has previously stated that he believes that both Brad Stevens and Danny Ainge were more concerned about Isaiah's future than just getting him back on the court that final season in Boston. Thomas also has stated that the Celtics had multiple people come to talk to him about the risks of playing through his injury.

Regardless I think the Celtics could have done more. Maybe forced Isaiah to not play, but again he's his own man. Boston ended up firing their medical staff that offseason for what it's worth. Now anyone that says Boston did Thomas dirty by trading him I can't get behind. The Celtics would have been absolute fools to re-sign him to a hefty contract. The mistake was choosing Kyrie Irving to be the player to cash in a Nets lottery pick for. Ainge would have been wiser to just trade Isaiah for something else and keep that pick to draft another young star.

Thomas' tweet on Robert Williams isn't some huge deal that should get Celtics fans to turn on Isaiah. Thomas can be bitter about how things turned out. That's natural. But Thomas also keeps saying he's back to how he was when he played for the Celtics and all the NBA teams and their scouts disagree. Thomas has campaigned pretty hard publicly to get another shot with the Celtics and maybe this tweet was him again being bitter about not getting that.

After the Celtics passed on Thomas yet again this season, he took what many thought was a shot at Brad Stevens while commenting on Demarcus Cousins.

Fans are saying Isaiah Thomas' tweet on loyalty was a shot at Brad Stevens https://t.co/k9OllCjtWc pic.twitter.com/zc6YmwtL7X

As opposed to other former Celtics, I didn't notice Thomas rooting at all on social media for his former coach (and now president of basketball operations) Brad Stevens, or former teammates like Marcus Smart, Al Horford, and Jaylen Brown.

In the end it's not like Thomas just burnt a bridge with the Celtics. They are NEVER re-signing him. If you haven't noticed, their coach will play 6 players in a game before he gives playing time to someone who can't guard in a switching defense. Thomas would never see the light of day in any significant playing time and neither he nor Celtics fans would be happy with that.

With regards to Williams' injury, the best possible long term remedy was to repair the meniscus, but that would have knocked him out for the entire playoffs and apparently that procedure ended up not being an option once surgery began. The surgery that did take place involved removing a piece of the meniscus and this can cause arthritis down the road, but I believe the Celtics that him playing through the swelling and pain this postseason won't have some long term effect.

A hip and a meniscus are vastly different. Time Lord should be fine.

Heard that before lol https://t.co/oxOEWdvRyT