Former Charlotte Hornets and NBA fan favorite guard Tyrone "Muggsy" Bogues shared some high praise for Boston Celtics star wings Jayson Tatum and Jaylen Brown in a recent interview. In a wide ranging interview with Guy Giles of Betway Insider, Muggsy had the following answer to the question, "Who are your top five players in the NBA right now?"

Steph and Chris Paul. Of course, KD and LeBron have skill sets, but I love the upcoming talent, I like Ja Morant, those kids that are now putting on a show like Jayson Tatum, Jaylen Brown. Those guys are becoming something special for the league and I love that elevation of their games and becoming almost, the face of the league. And, of course, I have to mention Giannis. Giannis just set the stage for it all.

Sounds like Bogues is a big fan of the Celtics core. The man has good taste. Muggsy burst onto the NBA scene in the late 1980's. The 5'3" guard teamed up with the 7'7" Manute Bol during his first season in the NBA with the Washington Bullets. The Charlotte Hornets scooped Bogues up in the expansion draft and he was a solid starting point guard for them throughout the 1990's.

Bogues was a fan favorite with the everyman and especially kids due to his height. Believe it or not the Charlotte Hornets of that time led by Alomzo Mourning, Larry Johnson, and Bogues, were of the most popular teams in the NBA with fans. What was also remarkable about Bogues is you'd thing due to his size he'd have to have been a tremendous shooter, but he was far from that.

And you'd also think Bogues would have been a huge defensive liability, but NBA players hated having Bogues guard them. Muggsy seemed to have limitless energy and would guard opposing point guards full court. And on offense he was an ideal pass first point guard with a tremendous assist to turnover ratio. 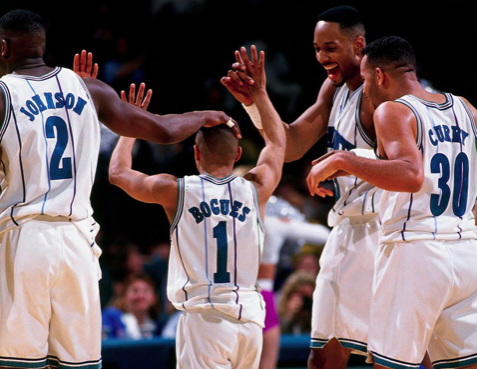 During the 1997-98 season, the rebuilding Hornets traded Bogues to the Golden State Warriors and he would finish off his career with them and finally with the Toronto Raptors.

Part of the reason I'm sure that Bogues is a fan of both Steph Curry and Chris Paul is because of their North Caroline roots. Bogues played with Steph's father, Dell, in Charlotte, and the Wake Forest University product Chris Paul was drafted by Bogues' own Charlotte Hornets.

That Hornets team would eventually move to New Orleans and change their nickname to the Pelicans. This allowed the newest NBA franchise the Charlotte Bobcats to reclaim the name "Hornets."

Could Bogues play in today's NBA. Well he was asked, "How do you think you'd fare in today's game?" and had the following response:

Well, I believe I'd fare well today's game. I'm quite sure every NBA player feels that way, if not they wouldn't have even made it to the NBA. That's just the mindset of confidence you have within yourself. But looking at the style and looking at the rules of the game when we played and how we played it, it's a lot more free, a lot more open, not as physical. The skill set in some of these guys is off the chart in terms of the shooting ability. The lane is wide open, you can't hand check. So, I think I'd have fared well in this era.

Bogues remains the shortest player to ever play in the NBA.