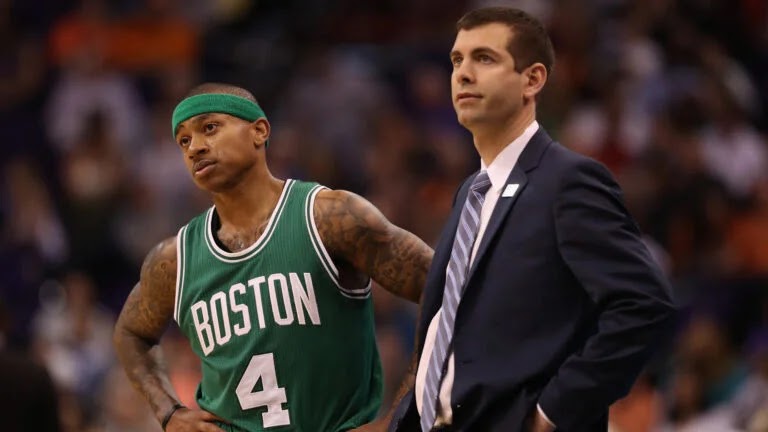 DeMarcus Cousins had a spot start last night for Nikola Jokic, and put up 31 points and 9 rebounds. Boogie's former Sacramento Kings teammate Isaiah Thomas was happy for him, but used the moment to tweet about ooportunity and loyalty.

A Coach who he helped early in his head coaching career… Returns the favor when needed for the player. That’s how it’s suppose to be. Be loyal to who helped You. It all comes full circle! Thibs does it to his guys, doc rivers as well and a few others but s/o to coach Malone https://t.co/aGBVa32LTX

Immediately fans started commenting on who wasn't included in this list with Malone, Rivers, and Thibs. 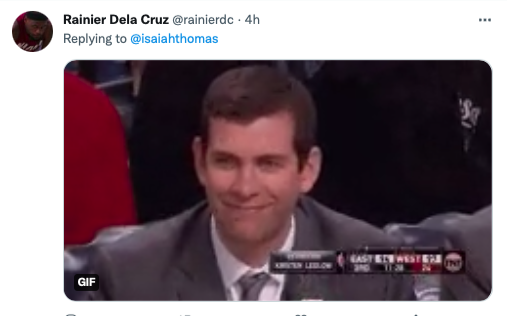 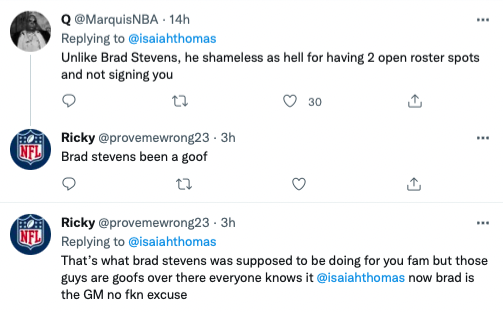 So what say you Celtics fans? Was Isaiah taking a shot at Brad Stevens and the Celtics? And is Thomas in the right?

There are actually so many questions/topics to debate here. Should a coach owe something to a player when that player excels under said coach. Or should the player be thankful to the coach for bringing out the best in him and giving him the opportunity.

Speaking of opportunity, Isaiah has claimed for a few years now that's he's back to his old self, but hasn't been able to stick in the NBA. He blames it not getting the opportunity, while NBA scouts say it's because he's lost a step and is even more of a defensive liability. What say you?

Speaking of loyalty, the Celtics earned a reputation of being disloyal when they traded Thomas after he played hurt and following the tragic passing of his sister? But were the other alternatives? Backing up the "brinks truck" would have been one of the poorest decisions in NBA history. You can't pay players for their past success. Not with a salary cap and luxury tax. And did the Celtics force Thomas to play after his sister's death or in his final season in Boston? The answer to that is no.

The one area where the Celtics could be at blame for is misdiagnosing how serious IT's injury was. Could he have returned to the player he was if he had been shut down earlier that year? I'm not sure we'll ever get the answer to that.

It should be noted that Cousins and the Nuggets defeated the lowly, tanking Rockets last night. And in today's NBA, if you give any center the usage that they used to have they can put up numbers. Even Enes Kanter can put up numbers. Also worth noting, your performance is more than how many points or rebounds you get. Defense being a huge key that's not included when fans simply judge a player by points and rebounds.

I have no doubt that if an NBA team gave Isaiah Thomas the keys to an offense like he had in Boston and 30 minutes a game, he could still average 20 points per game. But what would be his true +/-? How many points would the other team score on him. His teammates would have to cover for him, which would hurt their own individual defense. I don't think this would be a winning team.

Isaiah has another opportunity with the Hornets now and maybe he can stick as a back-up instant offense point guard. But Brad Stevens has been loyal to many of his former players and coaches from Butler and Boston. I don't think he deserves to have his loyalty questioned. Yes, when he took over the Celtics he could have signed Thomas, but he also employs a coach who doesn't play poor defenders. Signing Thomas to ride the bench and then get cut wouldn't appease the Celtics fan base or the "Just give IT a real opportunity" contingent.

The Celtics made the right call not giving Thomas the Brinks Truck of cash. They also made the right call trading him, though it was the wrong trade (Shouldn't have traded that last Nets pick in the deal and Kyrie Irving definitely wasn't the guy to waste it on). And I trust Stevens' and Danny Ainge's judgements on why they never re-signed him in the past few years.

Thomas was a great fit for those magical few years. At best he would have been a potential fit as a 13th man this season, but that would have caused it's own problems. Isaiah fans wouldn't have been content with him not playing and riding the bench, and let's be honest, neither would IT have been.

Players will leave for bigger pay days, to play with their friends, to play in certain cities, or to chase rings. GM's will trade or not re-sign a player if they think that will make the team better. Professional sports isn't a marriage where you should expect blind loyalty. Fans show too much hate when a player decides to sign elsewhere. It's the player's life/job and they are allowed to do what's best for them and their family.

GM"s know this and don't hold grudges when a player walks. And GM's know they will be fired in a heartbeat if they simply make moves to appease fans and then the losses come. Many fans will love a player... until that player loses a step and the team starts losing. Celtics fans loved Gordon Hayward and Kemba Walker until injuries and losses made many of them turn on them.

As always, I will continue to root for Thomas and I'm hopeful he will find a home in Charlotte. Won't say "permanent" home, since nothing in sports is permanent. But if IT can stick with a team for like 3 seasons as a Jamal Crawford, Lou Williams type instant offense off the bench that will be a great story.