The Celtics did what they were supposed to do Thursday night and that was to cruise to an easy win over a much inferior opponent. Boston was back to full strength with the return of Marcus Smart and Robert Williams, while Brooklyn was without their full Big 3 of Kevin Durant, Kyrie Iriving, and Ben Simmons. Recently signed Goran Dragic also didn't play.

Jayson Tatum led the way for the Celtics with 30 points and 7 rebounds. Time Lord collected another double double in his return with 12 points and 11 rebounds. In total, seven Celtics scored in double figures, which was nice to see.

“We’re passing up good shots to get great ones,” says Coach Udoka.

Ime Udoka continues to go with a very short regular season rotation of those seven players (The starters, plus Derrick White and Grant Williams). Even in a blowout, Payton Pritchard was the lone additional Celtic to play more than 6 minutes. Even recently re-acquired Daniel Theis played only 6 minutes (while starter Al Horford logged 32).

In the playoffs coaches almost always shorten their rotations, but the troubling issue here is that if the Celtics stick with a 7 man rotation in the regular season, besides possibly burning some guys out, you also leave no margin for error in case of an injury.

Ime Udoka says after the Celtics' blowout win: "That's a mentally-focused group that came out and executed ... We picked up where we left off."

Expecting the Celtics top 7 to remain healthy for every game of the playoffs is an unrealistic wish. But short rotation aside, there wasn't much not to like about tonight's first game back after the All-Star break. Boston built up a nice double digit lead in the first quarter and never looked back. This was their league best 10th game this season that the Celtics have led from start to finish.

Boston improves to 35-26 on the year, while the floundering Nets fall to 31-29. Next up for the Celtics is a chance to avenge their recent loss to the Pistons when they travel to Detroit for a Saturday afternoon match-up.

Tonight marked the 10th game of the season in which the Celtics never trailed. That's the most wire-to-wire wins in the NBA.

Over the past 7 weeks the Boston Celtics have lost just 1 game that Marcus Smart has played in 😮 #BleedGreen pic.twitter.com/A1JFmnbENI 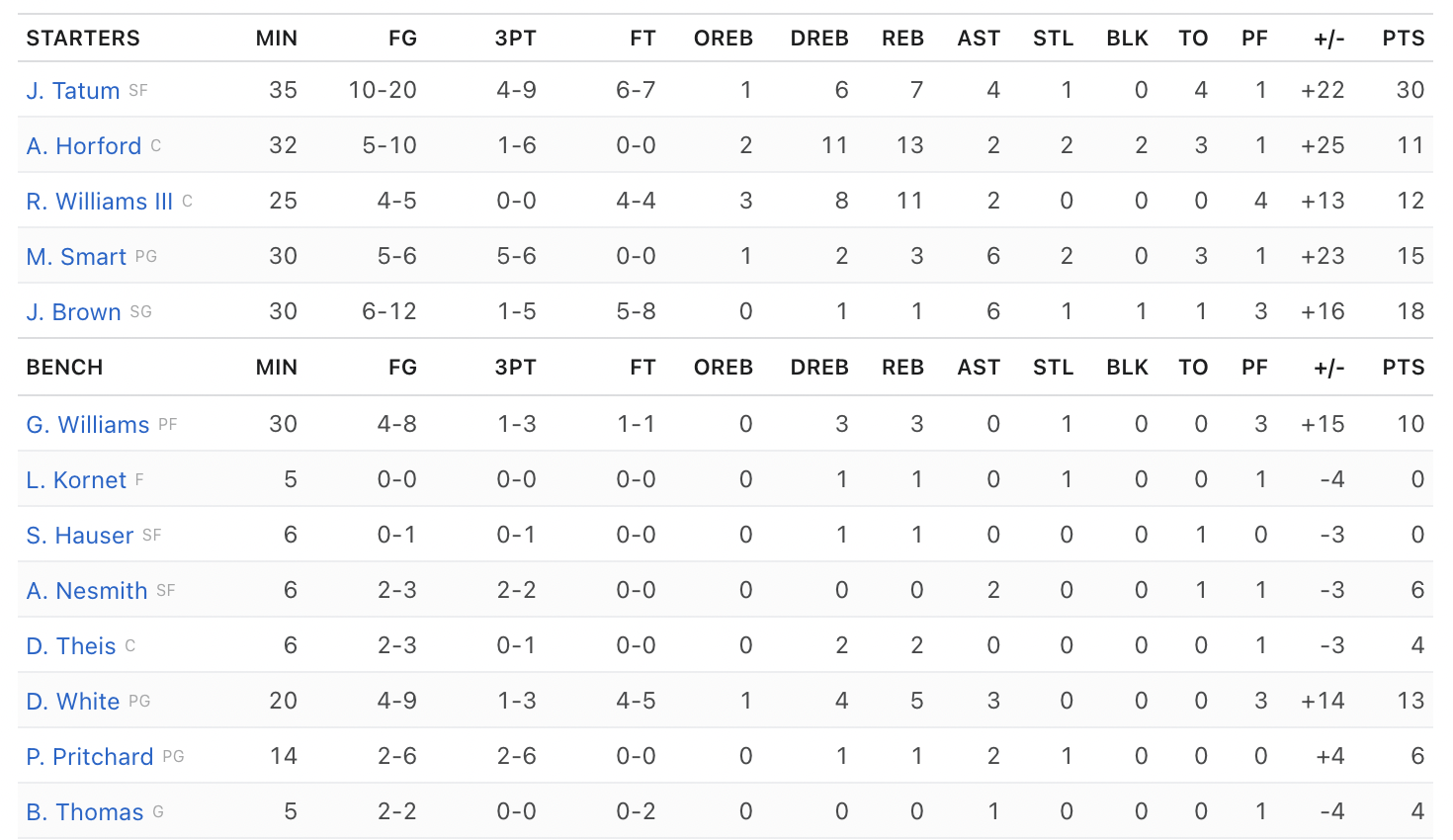