Well this loss took quite a bit of wind out of the Celtics sail. Always feel like a real winning streak doesn't begin until after 3 games, and Boston had a great opportunity tonight versus a sub .500 team. The Hawks are on an actual legit winning streak so a victory would have held a decent anmount of cache. But alas the Celtics lost to fall back down to .500 with a record of 25 and 25. That's the same record they owned through 50 games during last season's underperforming campaign. At least that's one thing they can say they are consistent at.

Jaylen Brown led the Celtics in defeat with 25 points and 12 rebounds, while Jayson Tatum had another one of the poor shooting 20 point games that have been all too common this season. Tatum for his part didn't exactly give the answers you want to hear post game either.

Jayson Tatum: "That's the beauty of what I do and my job. A lot of people can try to say what I could or should have done, but ultimately I get to make the final decision and gotta live with it."

(Repost because I accidentally copy/pasted the quote without the last phrase.)

Stop me if you've heard this before. The Celtics fell behind in the first half, mounted a nice comeback to catch back up in the 3rd quarter, but then didn't perform down the stretch.

Trae Young for his part, like Tatum, didn't have a solid game either, but Atlanta shot twice as efficiently from the 3-point line as a team than Boston and that made the difference. The Celtics have won at a great clip when they just shoot average from beyond the arc, but overall it's been an achilles heal for them this year.

The Celtics will look to bounce back Saturday night in New Orleans versus the 18-30 Zion-less Pelicans.

Jaylen Brown: "We've lost too many games on the line... we've got to definitely do something different" 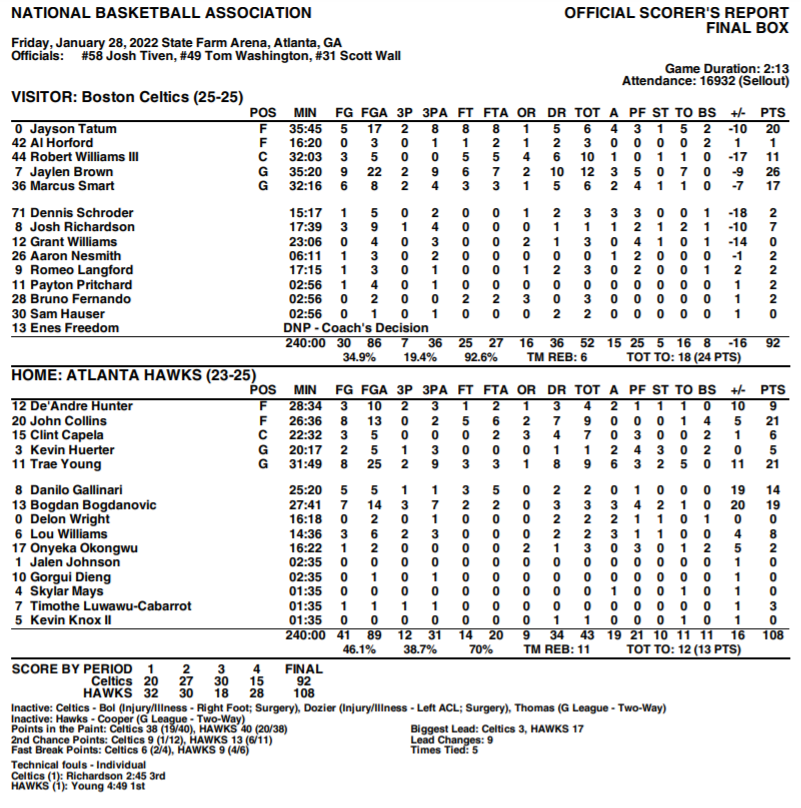