"The one guy I'm starting to keep a closer eye on these days is Bradley Beal."@SIChrisMannix & @ChrisForsberg_ join @trenni to discuss #NBATradeSZN pic.twitter.com/AzEnmYO6vB

Chris Forsberg and Chris Mannix were talking Celtics trade options as the unofficial beginning of the NBA trade season began on Wednesday. Mannix the read meat they wanted by floating the possibility of the Celtics trading for Bradley Beal, without parting with Jaylen Brown. The Celtics are wise to not be willing to trade Brown for Beal, but Mannix comes off rather uninformed in this video.

For starters, Mannix claims the Wizards are more likely to trade Beal due to their recent poor play. The Wizards are the same 4-6 in their last 10 games as the Celtics and Washington sits in 6th place in the Eastern Conference standings, while Boston is in 10th. It's not like the Wizards have completely fallen off.

Furthemore Mannix thinks Washington might want to trade Beal who will turn 29 this spring for a younger piece more in the age range of Rui Hachimura and Spencer Dinwiddie. Someone needs to inform Mannix that Dinwiddie is older than Beal.

Yes Beal is having a poor season, but that works both ways. The team is still in 6th place despite his shooting slump. The team and Beal himself can likely imagine they'll move higher up once he gets out of said slump.

And while the Wizards would be wise to consider trading Beal for a solid young package instead of investing $50 million a year for a player's early thirty's, if they wanted to trade him they could get a much better deal than what Boston could offer. And that's an issue I have with a lot of people who cover the Celtics who like to name trade targets, but then don't say the exact names that would need to be traded to get said player. Or they pander to the fan base by implying Boston could trade for a star by giving up some underwhelming offer.

If the Wizards decide to trade Beal, they could immediately trade him to Philadelphia for Ben Simmons or to the Warriors for their recent lottery picks. I'm sure Stevens did his due diligence and gave Washington his best non Tatum nor Brown offer for Beal this offseason that included Robert Williams, Marcus Smart, picks, and the kids, and the Wizards gave a hard pass. Again, Mannix didn't even name these names. If he thinks Boston could get Beal for less than that's really la la land.

If the Wizards decide to trade Beal, which they very likely may, it will be closer to the trade deadline on February 10th. But at that time, Boston will still be a tough match since they don't have a top shelf asset to offer as a centerpiece in a Beal deal. To use 2007 as an example, they have no top 5 pick or Al Jefferson young talent.

Maybe Robert Williams plays like one over the next month, but then I'm sure Celtics fans will be hesitant to want to see Time Lord traded in said deal ironically. Beal can't play the "I'm signing in Boston this summer" card since Boston won't have the cap space due to the extensions they handed out this past offseason. Washington would call that bluff and still trade him to Philly. And the 76ers would know that Boston couldn't sign him away in the summer.

I do think Beal could end up eventually on the Celtics, but I can also tell you that will spell the beginning of the end for Jaylen in Boston. Sure the team and everyone might say all the right things about how Tatum, Brown, and Beal will all sacrifice to make it work, but no championship team has ever been constructed where their Big 3 are all wings who all have the same primary skill (shooting the ball). And none of these three are a point guard or could pose as one. Obviously none are a big either.

So yes Beal might end up a Celtic, but the calculus hasn't changed due to Beal shooting poorly or the Wizards "falling" to 6th place. And Washington certainly can't trade Beal for a younger piece that's closer to Dinwiddie's age, since Spencer is older than Beal.

This video might get Celtics fans excited, but there was no meat to the report. Not even any potential outgoing Celtics players named. 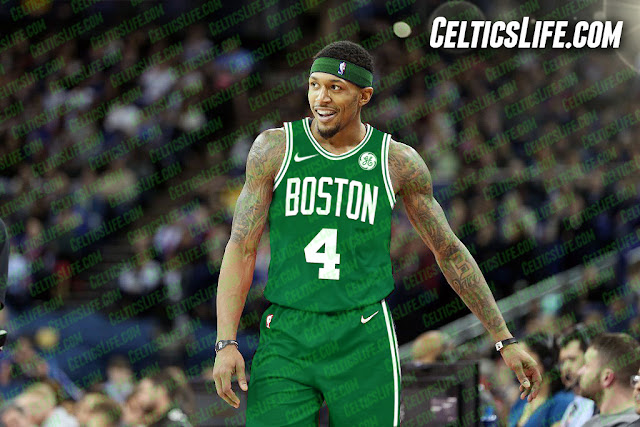