Schroder trade talks expected to begin as soon as Wednesday; Plus Celtics next steps 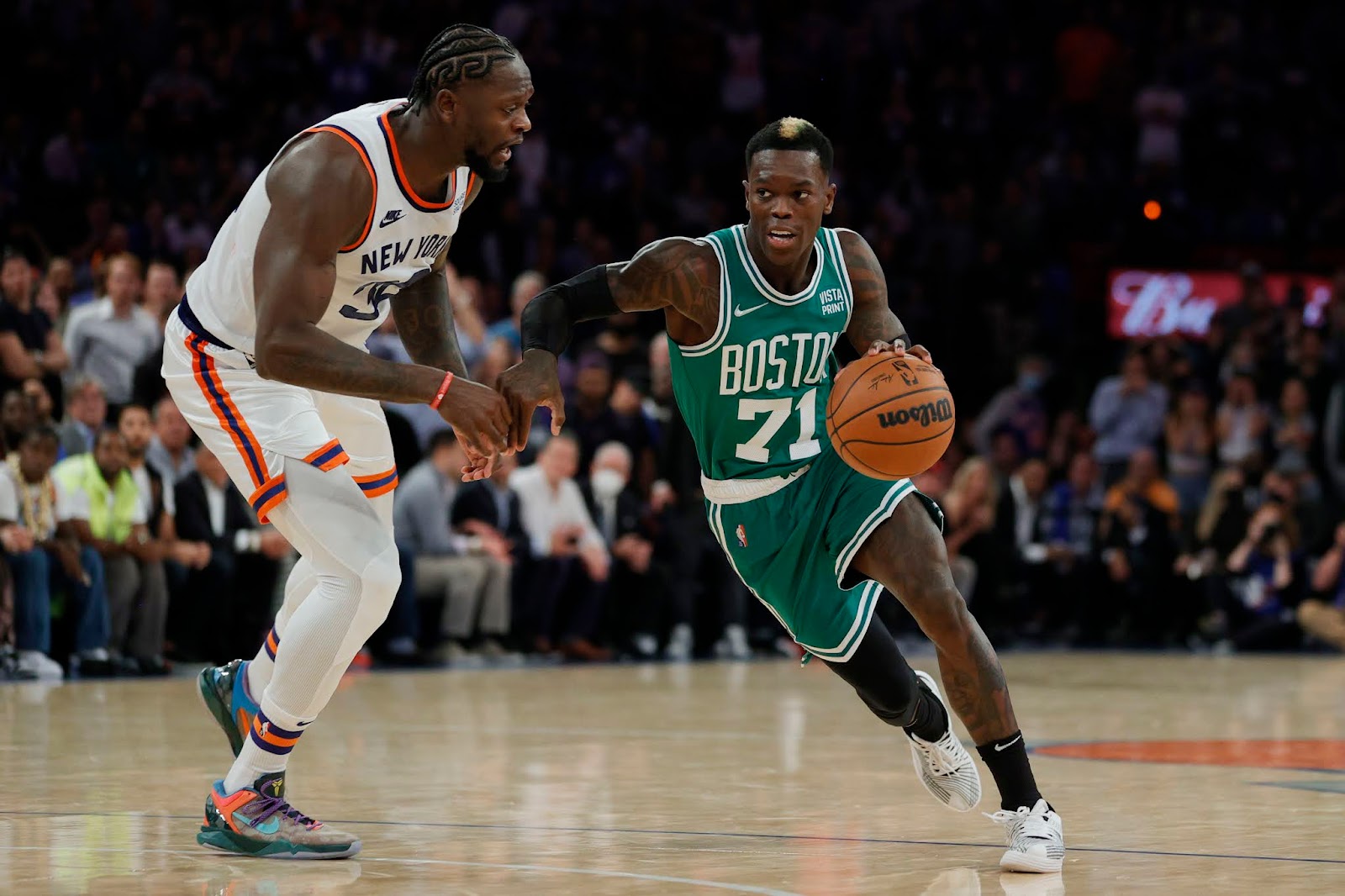 The NBA trade season begins this Wednesday when a large amount of players who signed contracts this offseason become eligible to be traded. One of those such players is the Celtics Dennis Schroder.

According to Shams Charania the Celtics are open to moving Schroder. This shouldn't come as a shock to anyone as Schroder was simply signed by the Celtics as a value pick-up. While he isn't worth the deal he passed up with the Lakers, he's worth much more than he's making. The Celtics do not own Schroder's Bird rights, so there wasn't much chance they'd be able to retain him past this season.

While Schroder has put up solid averages of of 17.5 points, 4.9 assists and 3.6 rebounds per game this year, the Celtics haven't exactly showed themselves to be title contenders 27 games in to the season. Their record stands at 132-14 going into tonight's game versus the Milwaukee Bucks.

In an ideal world, Schroder is instant offense off the bench. Unfortunately due to Jaylen Brown missing over half of this season's games, Schroder hasn't played his ideal rotation role. So the Celtics can go two ways with Schroder. They can keep him for the season and see how far they can go in the playoffs, or they can trade him to another team that either has a better shot at competing this year or would have the cap space to retain Dennis past this year.

Pretty sure in terms of value Brad Stevens would love to acquire a 1st round pick for Schroder. It's become increasingly harder and harder as the years have gone by for NBA teams to wrangle coveted 1st rounders out of teams for rentals though. The rub is that if the Celtics are able to put Schroder back into his super 6th man role and teams see that leads to winning and would thus be more willing to trade for him, will Stevens then be down to pull the trigger?

If a team goes on a run and then all of a sudden trades a key rotation piece for a draft pick that's kind of a white flag on the season. I mean that's how you acquire assets to help you build a contender, but just saying some people would hate the optics.

Another advantage of finding a new home for Schroder is that it would force head coach Ime Udoka to play youngsters like Payton Pritchard and Aaron Nesmith more. Truth be told the current Celtics team is lacking high quality 3 point shooters in an era that prioritizes them. Pritchard excelled from behind the arc all last season and by the end of the year, so did Nesmith. Both looked even better in summer league. And then the benching happened.

This year's Celtics team has a 2006-07 vibe to it, and why that might be by design https://t.co/GXFTR2OG94 pic.twitter.com/IEP7rEQUby

The thing is if you really want to build a championship contender and aren't living in la la land where you think you can trade for another star without giving up fair value, you kind of need players like Pritchard, Nesmith, and Romeo Langford to have more trade value. And the only way for them to have more trade value is for them to do well on the court in extended playing time.

So if the net gain of trading Schroder is a 1st round pick and higher asset value on your younger players that's a much more appealing path if you are looking to build a true contender. My question always with players is "Can I see this player being a part of the rotation of the next Celtics championship team?"

Otherwise what's the point? Like Al Horford's return is a nice story and we'd be worse than 13-14 without him, but is there a realistic path to him being a part of the next Celtics championship team? Very hard to see one. The player taken with the draft pick given up Alperen Şengün could have been one. Or at least the odds were a lot higher. Or maybe he's a young player that shows enough to be used in a package deal for another star.

When you have guys like Tatum, Brown, and Smart on your roster making big money you also need some complimentary pieces making very small money. Complimentary guards to these players are shooters (like Nesmith and Pritchard), not drivers, players that need the ball in their hands like Josh Richardson and Dennis Schroder.

I can't guarantee either Pritchard or Nesmith is good enough to be a rotation piece on the next Celtics championship team, but their skillsets, age, and contracts work at least.

So don't expect a Schroder trade this week. Trades are much more more likely much closer to the deadline, but at the end of the day the Celtics would likely be much better served trading Dennis this season, picking up another asset for him, playing the kids, and if that means they lose a few more games, so be it. Just means a more valuable 2022 first round pick either to use or to trade.

At the end of the day, all the Celtics greatest assets are players Ainge drafted or their future 1sts, so Brad Stevens' success will likely be tied to how well he drafts. This goes for every president of basketball operations in the NBA. I'm curious to see who he drafts with his first few selections (If he doesn't bail for a coaching gig before he can make a few).

And yes expect another name for the Celtics to be open to trading this year to be Al Horford. That will have even worse optics for the fans that truly believe we can win it all this year, but if Boston can get an asset for Horford, they 100% will pull that trigger.

Josh Richardson and Enes Kanter Freedom are two other vets who will be made available. The common theme with the players being made available (Schroder, Horford, Richardson, Freedom) is that none of them have a likely chance of being on the Banner 18 Celtics squad. They could be, but they aren't making or breaking a team into a contender by the time Stevens has retooled the Celtics.

Hopefully as soon as next season we will make a leap back into the conversation of contenders. The trades Stevens makes this season to arm him with more assets for this coming offseason will help determine that. And truth be told the greatest asset the Celtics have beyond the Jay's would be their 2022 pick if it ended up being a solid lottery one.

Which Boston Celtics veteran is most likely to be traded first?

Not advocating for tanking (and you know I hate the NBA's rewarding of ineptitude and losing), just saying that in 2007, the Celtics don't trade for Ray Allen if they don't have a high lottery pick. And if they don't trade for Ray, they don't get KG. My guess is Portland is going to tank this year because they know this isn't going to be the year and adding a top pick as an asset could turn their fortunes around.

Stevens added Schroder, Horford, and Richardson this offseason. Again, we wouldn't have 13 wins without them. Ainge actually went into the 2006-07 season trying to be a playoff team as well. And then he changed course. How soon might Stevens?

You want Damian Lillard on this team without trading a Jay? Well adding a top 10 pick (Boston's own) another pick (from trading Schroder) and improved play from Oregon native Payton Pritchard would certainly make your Robert Williams, Marcus Smart, Pritchard and picks offer much more potentially appealing to a team like Portland.

Right now, Boston has no shot at trading for a 3rd star. A Schroder trade would begin the process of building up the assets needed to acquire one.